A third candidate is poised to enter the Republican primary to succeed Pam Bondi as state attorney general in 2018. Frank White, a first-term state House member from Pensacola, told the Times/Herald he’ll make a final decision in a few days.

“We need a proven conservative,” White said. “We need someone who has experience managing a large organization.” He said the state needs a leader who can “defend the Constitution 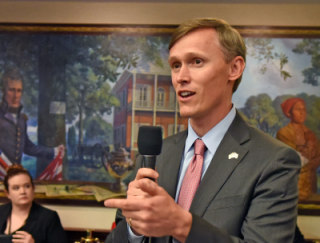 White, 39, a native of Amarillo, Tex., was student body president at Southern Methodist University in Dallas before moving to Florida. A married lawyer and father of three, he’s general counsel and chief financial officer for nine Sandy Sansing car dealerships.

White would enter a race that includes Rep. Jay Fant of Jacksonville and Ashley Moody, a former circuit judge in Tampa who has raised a total of more than $1 million through her campaign and a political committee.

Tampa lawyer Ryan Torrens is the lone Democrat running for a powerful Cabinet post that has been in GOP hands since Democrat Bob Butterworth retired in 2002. The A.G. has a wide array of duties affecting consumer protection, civil rights, death penalty appeals and open government.

The boyish Panhandle lawmaker said he’s not concerned about Moody’s head start and sees the race as wide open. “It’s still early,” he said. “I don’t think your average Floridian has tuned into this race. I like my chances. I think there’s a path for a proven conservative to run and to win.”

White raised $252,000 in 2016 as he coasted to victory in solidly conservative House District 2 in Escambia and Santa Rosa counties. He ran as a “conservative businessman, not a politician.”

He listed a net worth of nearly $2.5 million in July and said he’s willing to spend his own money to be competitive.

“We’re prepared to invest financial resources that it takes to win this race,” White said.

Down-ballot Cabinet races in Florida are heavily influenced by money, as little-known candidates struggle for statewide attention. This cycle will be especially challenging as a competitive U.S. Senate race and wide-open race for governor will get most of the media coverage and all three Cabinet offices will be open.

White drew headlines in the 2017 session of the Legislature when he sponsored legislation that would have denied eligibility for food stamps to nearly 230,000 Florida residents. The highly controversial bill -- read the background here -- did not pass.