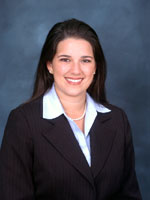 "We're in a uncharted territory,'' Flores said. "So everyone is trying to balance these issues. It needs to be something that's fair for the victims and for Sen. Latvala and I think everyone understands it's a fine line to walk."

Senate President Joe Negron has announced he is seeking an independent third party to conduct an investigation, and the hiring of that person will be handled by Karen Chandler, the head of the Office of Legislative Services and a veteran Senate staff member.

Flores said she hopes the process should be handled "in the most fair and expedited manner" but did not have an opinion s to whether a woman should be involved.

She underscored the comments of Attorney General Pam Bondi on Tuesday. "If people don't come out and say who it is behind this, it makes it close to impossible for there to be justice in the minds of the victims,'' Flores said.

She said that individual senators, Bondi and statewide leaders, "have said they want the Capitol to be such a safe space that we would hope these women would feel comfortable coming forward."

"It's probably the hardest to be the first one, but it may help others in the future,'' Flores said.

Flores, who has acknowledged that she has often been on the receiving side of sexually inappropriate remarks in the Capitol, said she expects this discussion to continue for a while.

"The issue of sexual harassment is something we will be dealing with throughout the session, until they culture is no longer,'' she said, "The silver lining is we are having a conversation about an issue people have talked about, but not really talked about."