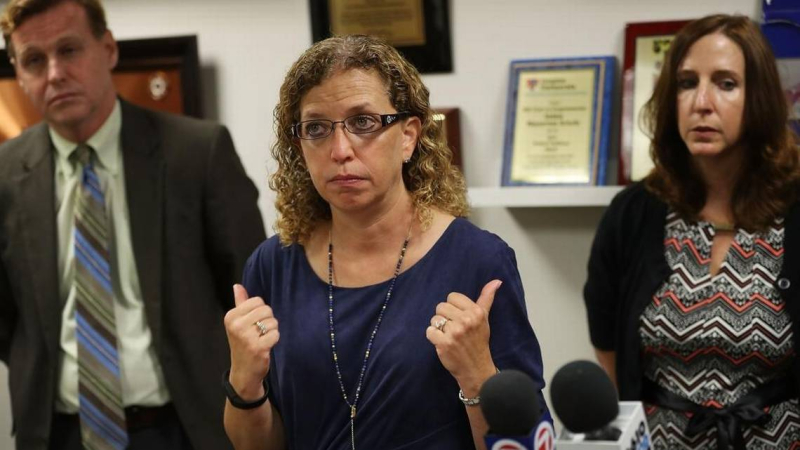 The former Democratic National Committee chairwoman has spent the past five days tearing into Rep. Debbie Wasserman Schultz’s DNC leadership and organizational skills ahead of the release of her new book, “Hacks,” on Tuesday, one year after Donald Trump’s victory.

Brazile blasted the Weston Democrat’s choice to paint the walls of her DNC office tropical pink and a host of perks associated with the leadership role, like a Chevrolet Tahoe fully staffed with a personal entourage — including an assistant known as a “body woman” — according to an advance copy of Brazile’s book obtained by the Washington Post.

According to Brazile, the DNC was dependent on Hillary Clinton’s campaign cash for survival and Wasserman Schultz was more than willing to let the Clinton campaign pay most of the DNC’s debt in exchange for a measure of control within the party organization, which is supposed to remain an impartial umbrella organization for all Democratic presidential candidates.

Bernie Sanders, the independent senator from Vermont who campaigned for the Democratic presidential nomination, repeatedly charged that the DNC under Wasserman Schultz was “rigged” in favor of Clinton.

“Debbie was not a good manager,” Brazile said in a book excerpt published by Politico. “She hadn’t been very interested in controlling the party —she let Clinton’s headquarters in Brooklyn do as it desired so she didn’t have to inform the party officers how bad the situation was.”

Wasserman Schultz declined to address the specific criticisms levied by Brazile in an emailed statement.

“It was a tremendous honor to be asked by President Obama to serve as chair of the DNC,” Wasserman Schultz said. “I am proud of the work our team did to support Democrats up and down the ballot in the 2016 election and to re-elect the President in 2012. With Donald Trump in the White House, Democrats must stay focused on enacting a progressive agenda to protect our citizens, our values and our democracy and remain united towards our goal of electing Democratic congressional majorities in 2018.”