« Raquel Regalado bows out of Republican primary for Ros-Lehtinen seat | Main | Medical marijuana advocate is out of governor’s race — and the Democratic party, too » 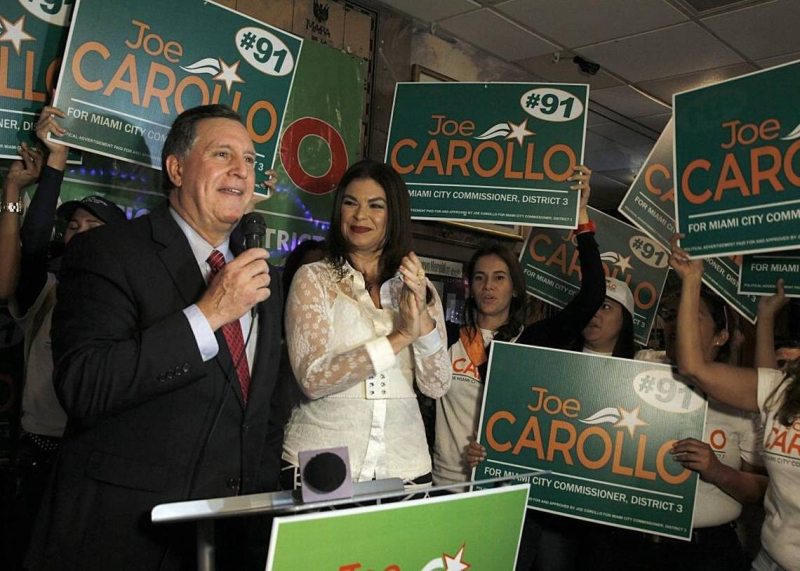 Miami politics can be a lot like Thanksgiving dinner: at times, there's so much goodness it's just too much to consume in one sitting.

That's what makes leftovers so great.

And so, at the end of a short week in which former Miami mayor Joe Carollo returned to office, opponent Alfie Leon sued to keep him out, ex-Congressman David Rivera finally mounted a legal defense over a 2012 elections scheme, police scrambled to downplay Art Week terrorism concerns, former Miami mayor Tomas Regalado gave an expletive-laced goodbye, and his daughter, Raquel Regalado, withdrew from the Republican Primary to replace Ileana Ros-Lehtinen, we wanted to come back with a piece of political fodder from Carollo's Tuesday election night victory that we just couldn't squeeze in before the holiday:

After running a gloves-off campaign for Miami City Commission that focused as much on his enemies as his own platform, the sharp-edged Carollo dedicated plenty of time on election night to naming his foes in his half-hour victory speech and in subsequent media interviews.

Carollo, who can be sworn into office Dec. 2, basically laid out who'll be getting coal this holiday season.

Floridian Partners: The lobbying firm, one of Miami's most prominent, got an unwanted shout-out from Carollo Tuesday night. He named the firm as one of the outfits that he believes did everything it could to keep him from office.

Carollo also said that leading into election day, he and his wife received a series of creepy phone calls that consisted of heavy breathing and laughing from blocked numbers that they traced back to firm partner and City Hall lobbyist Brian May.

Llorente & Heckler: Another Miami firm active in city government was named by Carollo as a behind-the-scenes player backing opponent Leon in an attempt to keep the former mayor out of office. Carollo gave the name of the law firm in media interviews, but Llorente & Heckler also overlaps with LSN Partners, a prominent lobbying and political consulting outfit.

"These are the firms that raised all kinds of money against me, of course, behind the scenes, because this is the worst part: they're cowards," Carollo said. "They can't do anything up front."

The whole Suarez Family: Miami's new mayor, Francis Suarez, can't be happy to hear this one. While Carollo's bile for Suarez's father, county commissioner and former mayor Xavier Suarez, has been well-established, Carollo broadened his opposition Tuesday night and included "the whole Suarez family" on his list of opponents who tried to keep him out of office.

Carollo declined to elaborate Wednesday on what exactly that meant for his relationship with the city's new mayor, who repeatedly said in public that he stayed out of the election even as Xavier Suarez tried to stop Carollo from getting back into office. Carollo did say Tuesday night that he's willing to work with anyone. But this quote can't make Francis Suarez feel particularly optimistic about his odds of having a smooth relationship with the city's newly elected District 3 commissioner:

Xavier Suarez, Carollo said, "came out doing everything in the world that he could to defeat me. So did the whole Suarez family and his whole campaign apparatus. That's a fact."

Manny Diaz: Carollo included a shot in his victory speech at former Miami mayor Manny Diaz, who has quietly remained involved in city politics since leaving office in 2001. Carollo named the former Miami mayor as another of his behind-the-scenes opponents.

Carollo called out the Miami Herald during his victory speech, saying the news organization lacks the investigative force it once had, and accusing the Herald of kowtowing to some elected officials for political convenience and purposefully burying stories.

"When a phantom political committee can mail political attacks filled with defamation using a postage stamp coming from another state from a company that hasn’t existed in years and whose owner is dead, and you have a press that chooses to cover it up and not report it, how can we doubt why we have so much corruption in Miami?"

(Here's the Herald's story on that issue, and another mention here. Just sayin.)