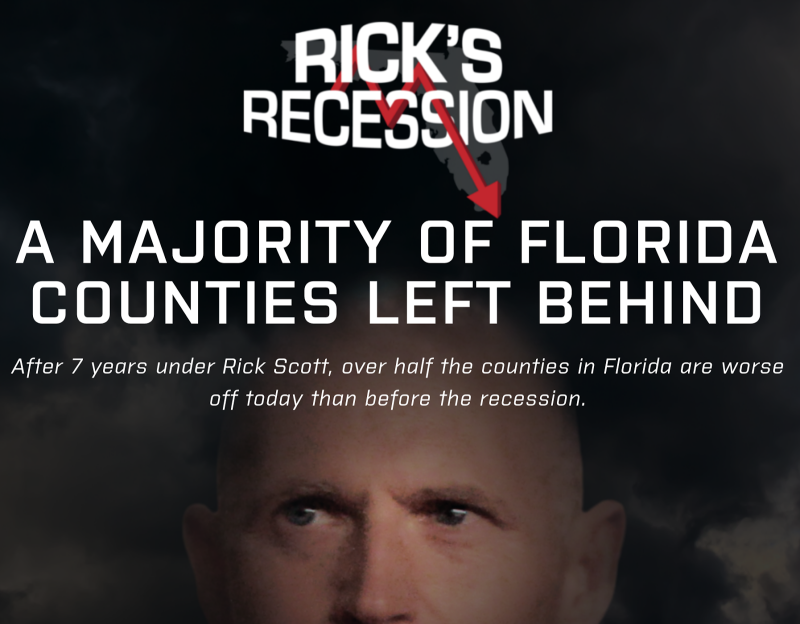 A day after the Florida Chamber held a day-long "prosperity summit" to focus on Florida's growing population of people in poverty, a left-leaning advocacy group has launched a website and social media ad buy highlighting Gov. Rick Scott's economic record -- and focusing on the regions of the where the economy has not improved during his term.

RicksRecession.com is the work of For Florida's Future, an organization that calls itself a "working families advocacy group"  and which also operates a super PAC. The data comes from the Florida Chamber Foundation, the FIU Metropolitan Center, and uses media reports over the last year -- such as how 36 of the state's 67 counties have still not returned to pre-recession employment levels and how 45 percent of all Floridians are considered "working poor."

Blake Williams, For Florida's Future communications director, said the group is highlighting the issues in a "significant" social media ad buy on Facebook and Twitter.

“Not a single thing Scott has focused on - slashing funding for public schools, refusing to expand Medicaid for millions of low-income Floridians or giving taxpayer funding to corporations who donate to his campaigns - has helped everyday Floridians,'' he said in a press release.

"If we’re going to dig our way out of Rick’s recession, the first thing we need to do is start prioritizing working and middle class families, something Scott clearly hasn’t done.”

An economic analysis compiled for the Miami Herald/Tampa Bay Times Tallahassee Bureau by Florida International University’s Metropolitan Center in October 2016 showed that in 40 of the state’s 67 counties there were fewer people working in 2015 than were working in 2007. Only South and Central Florida’s metropolitan areas had seen employment levels return to — or exceed — pre-recession levels.

“Florida has been a national leader in job creation since Gov. Scott took office and the state has gone from losing 800,000 jobs in the four years before he took office to adding more than 1.4 million in less than seven years,'' he said.

Can you provide me with an update of the data you allege is outdated on ricksrecession.com?
Do you dispute the Florida Chamber claims and concerns about the widening prosperity gap in Florida?