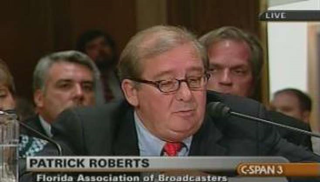 A judge in the U.S. District Court in Tallahassee denied a preliminary injunction to TV executive C. Patrick (Pat) Roberts on Friday, reaffirming the Florida House's powers to enforce the subpoenas it issued last week as part of its investigation into Visit Florida's tourism contracts.

House Speaker Richard Corcoran, R-Land O' Lakes, was not physically in the courtroom. But his presence weighed heavy on the proceedings as Judge Mark Walker, an Obama appointee, discussed how "some could use the word … 'bully'" to describe the House's actions in issuing the subpoenas, which had a "thousand-pound gorilla aspect" when issued against a single private citizen.

"We are coequal branches and I would respectfully suggest to the Florida Legislature, just as I am cautious about overextending my jurisdiction, my colleagues in the other branch should similarly comport themselves," Walker said.

Roberts was seeking the injunction to prevent what he viewed as "imminent danger" of being severely punished by the House —the state Constitution allows it to impose up to $1,000 in fines and 90 days in jail per day Roberts is deemed in contempt —for not handing over the business contracts and tax records requested by the House. As executive of MAT Media, LLC, Roberts was granted multi-million dollar contracts in 2012 by Visit Florida, the state's tourism arm, to produce shows that featured celebrity chef Emeril Lagasse and promoted the state as a fishing destination.

He has maintained that many of the documents contain "trade secrets" or nondisclosure agreements with other companies.

The House has been investigating if Roberts raked in big profits from the deal at the taxpayers' expense, after the Naples Daily News found that Roberts had been gifted a $175,000 boat from one of the program's sponsors and kept all advertising and sponsorship revenue.

Despite the ruling, Roberts's lawyer, Tim Jansen, said outside the courthouse that it was a "victory for Mr. Roberts and for every citizen in the state of Florida."

"Only in their response to our lawsuit for an injunction did they finally concede that they will give meaningful opportunity to be heard on these subpoenas," Jansen said. "Otherwise Mr. Roberts would've been incarcerated, we believe, immediately at 5:01 or as soon as session could've been put into place by the Speaker."

Because the House has never exercised its authority to issue subpoenas before, there is no defined way for Roberts to argue against them.

But during the hearing, Adam Tanenbaum, the House's lawyer, said they would continue to negotiate with Roberts about which documents the House had a right to obtain and which would be considered public record, and would allow two state lawsuits related to the subpoenas play out.