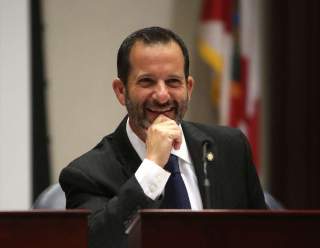 A giant K-12 education package bill had its first public presentation on Thursday in the House Education Committee, where it passed despite light criticism from Democrats who requested more time to review its many provisions.

The bill, which was posted online Tuesday night on the committee's page, addresses a myriad of issues such as accountability of private schools receiving tax credits, allows schools to set up their own governing boards with school board approval and expands a now-pilot program for excelling principals to oversee multiple schools.

It would also create a new tax credit scholarship of about $300 to $500, called the Reading Scholarship Account, for third-graders who do poorly on reading exams.

When Shevrin Jones, D-West Park, requested the committee wait until a later date to vote on the bill so they had more time to review the specifics, committee Chair Rep. Michael Bileca said the bill was a "work in progress" and they needed to keep it moving.

Addressing one provision that concerned some members, Bileca, R-Miami, said allowing principals to establish independent governing boards will allow district schools to better compete with charter schools by having more autonomy and room to experiment.

"When I was meeting with districts something I heard over and over again was, 'Just let us have a level playing field,'" he said. "Let's look for those areas that can give you (districts) more ability for meaningful change."

Another provision that stirred skepticism among some members of the committee and the public were the allowable uses of the reading scholarship, which include paying private tutors and supplemental learning materials but also putting the money into a college savings account.

"Why are we allowing these funds to be saved for college? How is that going to help the student to read in third grade?" asked Marie-Claire Leman, a leader in the grassroots group Common Core who spoke at the meeting.

Bileca said that section could change based on the concerns he heard.

Although it is the most far-reaching preK-12 bill this session so far, this 109-page proposal joins the ranks of many other school choice-related bills that have been passing through committees as the topic remains a central focus of the Legislature. Others would grant scholarships for students with disabilities so they could attend private schools, or expands the Schools of Hope program that encourages charter schools to open near low-performing district campuses.