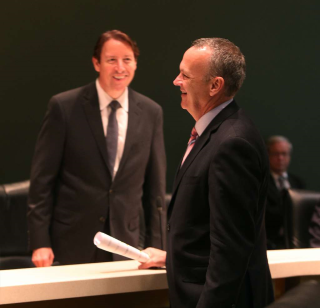 The Florida House and Senate started the 2018 session with unified messages supporting increases to higher education funding. Two weeks later, however, the chambers have a difference of opinion — worth more than $600 million.

The Senate Appropriations Subcommittee on Higher Education introduced its budget proposal Wednesday, calling for a 6.6 percent increase in spending for colleges and universities, or $383 million.  Meanwhile, the House’s proposal, unveiled Tuesday, proposes to cut $217 million from universities alone with about a $45 million net reduction for colleges.

Sen. Bill Galvano, R-Bradenton, who chairs the subcommittee, said the extent of the House cuts caught him off guard.

“The level of cuts proposed by the House was more than I expected,” he said. “It just means there’s a bigger delta that has to be negotiated going forward into conference.”

Because these plans or so different, higher education will likely become a major bargaining chip in the weeks to come if lawmakers want to approve a state budget by the time regular session ends on March 9.

Senate President Joe Negron, R-Stuart, has repeatedly said increased university funding is a top priority, and the first act of the Senate this session was to pass a bill with sweeping changes aimed at elevating Florida's university status nationally. One of the costliest provisions is an expansion of the merit-based Bright Futures Scholarships so that above average students who don't qualify for full rides would have 75 percent of their tuition covered (up from about half now).

And in an interview two weeks ago, Corcoran emphasized the need to improve Florida’s universities, saying that it was “inexcusable” for the third-largest state to have only had a university ranking in the top 10 nationally for the first time last year.

Despite those sentiments, two other goals sit atop Corcoran’s session wishlist: a crackdown on “sanctuary cities” and school vouchers for bullied students.

Additionally, the House and Senate disagree over how to pump more money in preK-12 education. The House rejects the Senate’s proposal to capitalize on increased property values, which it views as a tax hike.

Sen. Gary Farmer, D-Lighthouse Point, said the House's proposed higher education budget was a "departure” from where the Senate is heading.

"A lot of people are speculating that this is about the back and forth between the House and the Senate and the House is aware that our president's priority legislation is his higher education bill," said Farmer, who sits on the higher education budget committee. "I’m hopeful the Senate stands strong on our policy and the products we've come up with that are a result of a lot of discussion and comprise. That’s the way the legislative process is supposed to be. It's not supposed to be about forced tactics."

“The policy we agree on, but the policy is not going to go anywhere unless we have the dollars to support it,” Galvano said.

When the House subcommittee proposed its cuts, Chair Larry Ahern, R-Seminole, said higher education has a surplus of funding because universities and colleges can rollover extra cash into rainy day funds, and state funding for universities has steadily grown in recent years.

“In this budget we will be recommending that we start slowing that growth,” he said. “The intent is to reduce operating funds, and thereby entice colleges to spend some of their fund balances.” Michael Brawer, executive director and chief executive of the Association of Florida Colleges, said he disagreed that higher education should be used to balance the state’s budget.

"I really don't have much to say about the House budget,” he said. “We’re starting in a hole, again."

Mark Walsh, a lobbyist for Tampa’s University of South Florida, said the universities’ reserve funds would offset the House’s cuts, although he still thinks a funding increase for universities is “likely.”

“The Senate has made a priority of increasing funds specifically for universities and even state colleges this year, so I think they’re going to negotiate hard for that,” he said. “I think the House will get there.”

Because the House’s proposed cuts are based on complex funding categories and formulas, there was no breakdown of cuts for each school. However, Walsh said it’s probable that any cuts would be based on how much each university or college has in the bank.