« Meet the new members of Herald/Times Tallahassee Bureau | Main | In farewell State of the State speech, Scott cites 'work to be done' » 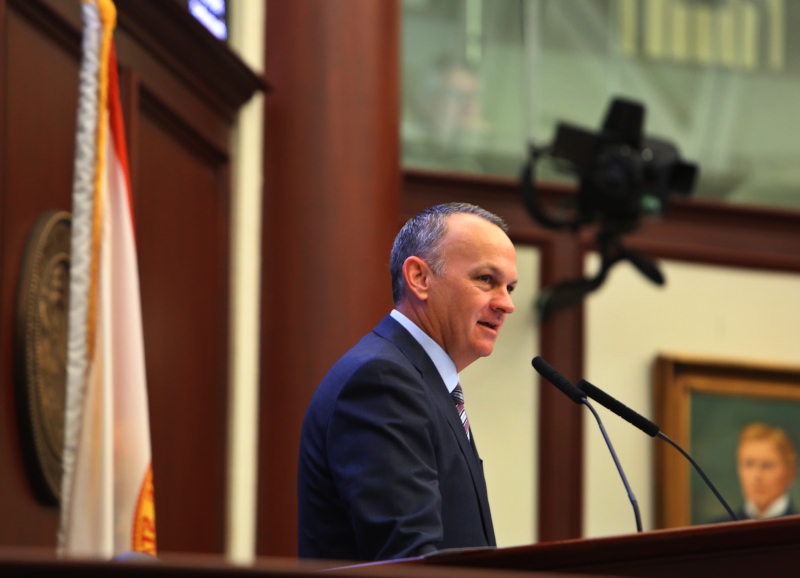 House Speaker Richard Corcoran opened the legislative session Tuesday with a set of fiery fiscal promises and a call on the chamber to be a "house of reformers" during the next two months.

Corcoran, who is in his final term and is considering a run for governor after the session ends, highlighted several of his legislative priorities, including a bill that would ban sanctuary cities in the state and policies that would expand school choice. Setting up a clash with Gov. Rick Scott's plan to grow funding for K-12 schools through increased local property taxes, Corcoran also vowed to resist raising taxes on individuals or businesses or dipping into the state's fiscal reserves — "the Florida House will not surrender a single penny."

The Pasco County Republican also turned his fire on the city of Tampa for what he has called a tax but what the city describes as anything but.

At issue is a $1.50-per-night surcharge on rooms at 14 hotels in downtown Tampa and Ybor City. The City Council authorized the surcharge last year at the request of the Hillsborough County Hotel and Motel Association. The money, an estimated $1.2 million a year, is earmarked for marketing that would benefit the participating hotels.

Corcoran, whose office has filed a suit targeting what he characterizes as an illegal tax, contended that the money will actually go for a new baseball stadium for the Tampa Bay Rays.

"Wrong as usual," Tampa Mayor Bob Buckhorn tweeted: "Assessment was requested by the hotels, imposed on themselves voluntarily and has nothing to do with the TB Rays. City merely a pass through. #factsmatter."

Corcoran made reference just once to the sexual harassment allegations that have rocked the state capital in recent months, noting that "long before scandals, this House of Reformers raised the issue of sexual harassment and insisted that every single person in this process will be treated with dignity and respect."

Senate President Joe Negron had said there would be "zero tolerance" for instances of sexual harassment in his preceding speech in the adjacent chamber, after the resignations of Sens. Jeff Clemens, D-Atlantis, and Jack Latvala, R-Clearwater, amid allegations of sexual misconduct.

Missing too from Corcoran's prepared remarks were mentions of the opioid crisis or Hurricanes Irma or Maria, though Puerto Rico representatives were in the audience for the State of the State.

"Let's be clear, there are no 'sanctuary cities' in Florida," she said in a statement. "It's a waste of our time and the taxpayers' money to come up here for sixty days and debate legislation that is clearly unconstitutional and will be struck down by a judge almost instantly if it becomes law."