« In testy debate, Corcoran, Gillum clash on immigration | Main | Shooting hits painfully close for Moskowitz, who graduated from the high school 19 years ago » 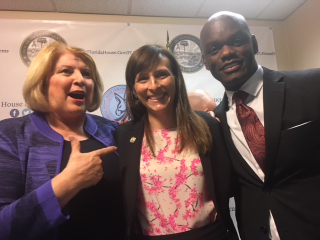 Democrats in Tallahassee were delirious with joy Wednesday as they welcomed Margaret Good, who handily won a special House election Tuesday in Sarasota, a county Donald Trump carried in 2016.

Good, who received loud standing ovations at a House Democratic Caucus meeting, literally overnight became a national symbol of what Democrats hope will be a "blue wave," an unstoppable anti-Trump, anti-Republican tsunami in 2018.

Good got 52 percent of the vote in a three-way race in defeating James Buchanan, the son of a popular local congressman, and a Libertarian candidate.

"This should put all Republicans on notice that it could be a very difficult year, if you're an incumbent, to survive," said Rep. Joe Gruters, R-Sarasota, chairman of the Republican Party of Sarasota and an enthusiastic supporter of the President. "Even relatively safe seats could be in play in 2018."

Democrats knocked on thousands of doors and flooded the district with volunteers, money and celebrity endorsements such as former Vice President Joe Biden, in a key county in the nation's biggest swing state in a year when the political stakes are very high, with a U.S. Senate seat, the governorship, three Cabinet seats, 27 seats in Congress and most of the Legislature all up for grabs.

Gruters complimented Good for running a strong race, but he said she got plenty of outside help that she won't have in a general election race in the fall when precious political resources have to be spread more widely.

"I think we can recover, and I think we'll win the seat back in November," Gruters predicted. He said five potential GOP candidates were texting him Wednesday.

"We'll see about that," Good told the Times/Herald. "People are fed up with what is happening up here. They want real representation. They want strong public education. They want environmental protections. They want people really talking about health care."

The House Democratic whip, Rep. Joe Abruzzo of Palm Beach County, said Republicans are aggressively pushing radical policies because they know a "wave" is coming in November that could also bring Florida a Democratic governor.

"It's in push mode, to get through as much of their policy that they can prior to possibly having Democrats in control," Abruzzo said.

Good will replace former Republican Rep. Alex Miller, who resigned last fall. She's the 41st Democrat in a 117-member House, with three vacant seats yet to be filled in special elections.