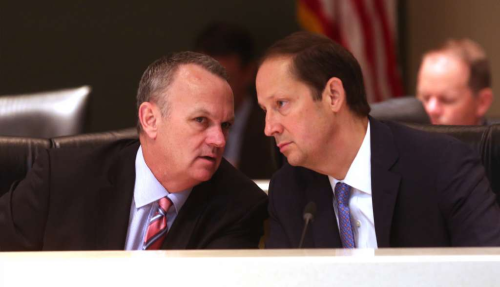 It was a tense day at the Florida Capitol on Wednesday, largely because of the Parkland shooting survivors and gun control activists who descended on the statehouse in the thousands. But there was internal turmoil as well.

"We don't know what to say more to the Senate in terms of, 'Let's start negotiations,'" he said. "They've completely stonewalled us. They're acting like  kindergarteners."

He explained that while many Senators have been cooperative with the House this session, there are "certain individuals" that are the problem. He confirmed those people are at  "the top."

"It's just silliness — grow up," Corcoran said. "The Senate needs to grow up."

There's speculation that Senate President Joe Negron, R-Stuart, is holding out until the House passes its equivalent of SB4, which is the university funding package that he has championed this session, along with Sen. Bill Galvano, R-Bradenton.

But Sen. Rob Bradley, R-Fleming Island, who is the chair of the Senate Appropriations Committee, declined to discuss the reasons behind the Senate's lag time.

"I'm not going to negotiate the budget through the media," he said. "I'm surprised. That's an odd and unbecoming statement (from Corcoran)."

In general, the stakes and the rhetoric in the Capitol have been ramped up since the Parkland shooting on Valentine's Day, causing the Legislature to completely shift gears and refocus its session on an issue it has long ignored: restricting access to guns.

Because of this, the House Appropriations Chair, Rep. Carlos Trujillo, R-Miami, said it's not inconceivable the Legislature will have to meet beyond its scheduled end date of March 9, regardless of other infighting.

They cannot pass a final budget until they pass their promised proposals to beef up mental health programs in schools, school security and add new gun restrictions. Those plans are expected to be released Thursday.

"What's an extra two weeks or three weeks?" Trujillo asked. "If we could pass good, comprehensive policy that makes our children safer, our community safer, is it worth the extra two weeks? The answer is a resounding 'yes.'"