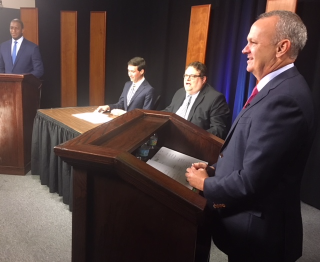 Gillum, 38, is an announced Democratic candidate for governor and would be the first African-American to hold the state's highest office. Corcoran, 52, is a Republican state lawmaker from Land O'Lakes who's expected to run and who challenged Gillum to a faceoff three weeks ago.

Corcoran repeatedly called illegal immigrants a threat to public safety, and Gillum accused Corcoran of exploiting the issue in a TV ad to stir racial and ethnic divisions, and demanded Corcoran take the ad off the air.

"Richard's Corcoran's Florida? I don't want my kids to grow up in it," Gillum said in his closing statement. "We're bigger than that. We're better than that."

In his closing, Corcoran knocked on a wooden lectern to suggest a police officer knocking on a door and telling parents that a child has been killed by an illegal immigrant.

"A completely and utterly needless and unnecessary death. Nobody should experience that," Corcoran said.

Throughout the debate, Corcoran defended his support for a law that banned so-called sanctuary cities. But after passing the House, the bill (HB 9) quickly stalled in the Senate.

Their 45-minute debate, live-streamed on the candidates' Facebook pages, took place in a sterile TV studio in Tallahassee with no live broadcast and no studio audience.

Both men stuck to talking points and played to base supporters. Their encounter touched on Jim Crow laws, Trayvon Martin, and Japanese internment camps and deaths of multiple women in cases involving undocumented immigrants.

It was a theatrical warm-up act for a pair of ambitious politicians who have never run for statewide office. It drew a crowd of two dozen reporters and gave both men what they crave the most: free media coverage.

Gillum repeatedly criticized Corcoran's TV ad that shows a teenage girl stalked and shot by a hoodie-wearing male attacker. Corcoran did not respond and instead accused Gillum of refusing to take a position on a "sanctuary state" bill in the House.

The debate was mostly about a Corcoran priority, HB 9, that sought to prohibit so-called "sanctuary cities" in Florida that refuse requests by federal authorities to detain undocumented immigrants who otherwise would be released.

After passing the House, the bill headed to a disinterested Senate, where two Miami-area Republicans, both Hispanics, blocked a committee vote.

Gillum called America a nation of immigrants and noted that Corcoran himself was born in Toronto where his father worked for the U.S. State Department).

"I don't have anything against Canadians, by the way," Gillum said.

"I'm not an immigrant. I'm a natural born American citizen," replied Corcoran, whose parents were World War II veterans. "To say I'm an immigrant is you playing politics and using perjoratives in the worst possible way."

They battled over words. Corcoran chided Gillum for using the term "undocumented immigrants" and said they should be called "illegal aliens."

"Illegals is not a noun," Gillum shot back, accusing Corcoran of trying to "dehumanize" immigrants.

— With reporting by Elizabeth Koh and Emily L. Mahoney