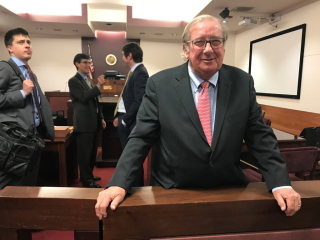 C. Pat Roberts stands in the courtroom where a hearing was held Friday in his lawsuit involving the Florida House. Emily L. Mahoney | TIMES

It's a case that has centered around one central question: How much power does the Florida House have to investigate private citizens?

It's not unlimited, according to a ruling from a state judge Wednesday that quashed the final two outstanding subpoenas from the House's investigation of TV executive C. Pat Roberts. His company, MAT Media, had contracted with the state's tourism arm to produce shows featuring celebrity chef Emeril Lagasse to promote Florida as a culinary hot-spot.

The House has been investigating whether Roberts made exorbitant profits on these contracts at the expense of taxpayers, and the final documents sought were Roberts' tax returns as well as his business ledgers and journals.

A federal judge had previously ruled that the state Legislature was well within its powers to issue and enforce subpoenas. But the state judge disagreed when it came to scope.

"Requiring production of the records would be approval of the very sort of governmental intrusion prohibited by ... Florida's Right of Privacy," wrote Circuit Judge Karen Gievers.  She had reviewed these documents and found they were not "germane or pertinent" to the House's investigation.

The ruling is a loss for Florida House Speaker Richard Corcoran, R-Land O' Lakes, who had signed the House's first-ever subpoenas on the floor of the House in a show of its investigative powers.

Roberts's lawyers had argued Corcoran was using this investigation for political gain in a year he is assumed to be running for governor. They submitted a copy of an ad he posted online that depicted him boasting to his family about his work to expose a $1 million contract that Visit Florida made with the rapper Pitbull.

"(The) Corcoran Family Super Bowl ad ... does provide a valid concern to MAT Media and Mr. Roberts about whether Speaker Corcoran and the other House members and staff would remember they are not above the law."

Adam Komisar, one of Robert's lawyers, said Roberts "has not had a chance to review the entire ruling with his attorneys, but he is pleased with the outcome."

But for the House, the fight is not over.

"It was a terrible decision," Corcoran said in a statement. "Of course the Legislature absolutely has the right to investigate all spending of taxpayer money. We will appeal this ruling and fully expect to win."

Rep. Jose Oliva, R-Miami Lakes, who will succeed Corcoran as speaker, said he too will continue this investigation.

During a hearing last Friday, Paul Phipps, former chief marketing officer for Visit Florida, testified that MAT Media made money from its contract with the state, as well as ads it sold to other taxpayer-funded entities like cities' tourism agencies and from charging $10,000 annual licensing fees to the state to use its copyrighted content.

MAT Media also benefited from at least two years' worth of state tax rebates designed to encourage film companies to shoot shows and movies in Florida. Records from the Florida Office of Film and Entertainment show that Roberts made $400,000 in a yearly salary for at least two years of the show's production.

The House Public Integrity and Ethics Committee has proposed a bill that would curtail state contractors' profits at 15 percent, likely a result of this case.