« Al Hoffman to Rick Scott: support an assault weapons ban or no endorsement -- and no money | Main | Parkland did it: Legislators to consider age limits and waiting periods on assault weapons »

Rick Scott's A+ NRA rating, and what it means now

As a candidate for re-election four years ago, Florida Gov. Rick Scott won an A+ rating from the National Rifle Association for his record on guns.

A 2014 mailer from NRA's national headquarters told Florida voters that "Scott will stop the gun control extremists from pushing their agenda to restrict your rights in Florida."

Only Scott "will protect your rights from the Obama/(Michael) Bloomberg gun control agenda," said the mailer, which featured a photo of a smiling Scott and a big "A+." 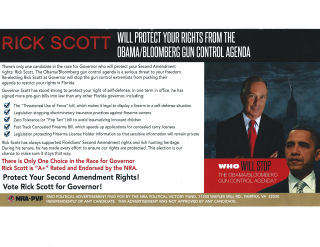 That June, Scott signed five pro-gun bills into law  in what the NRA said was historic.

One bill fast-tracked applications for concealed weapons licenses; another, the so-called "Pop-Tart" bill, protected students from being punished if they fashioned pastry into fake guns, "to avoid traumatizing innocent children," the NRA's mailer said.

As governor, Scott earlier signed laws blocking cities and counties from passing more restrictive gun laws than the state and allowing people to carry firearms during emergencies such as hurricane evacuations.

Now he says he will lead "a real conversation" about school safety after the horror at Parkland, where a teenage former student with a troubled past and an AR-15-style assault rifle is charged with killing 14 students and three adults on Valentine's Day.

A group of determined students at Marjory Stoneman Douglas High School, who are going to Tallahassee this week, wants a very different  conversation. It's about guns and the NRA and the politicians who support the gun lobby and have benefited from it.

"These people who are being funded by the NRA are not going to be allowed to remain in office when midterm elections roll around," student Emma Gonzalez said on NBC's Meet the Press with Chuck Todd on Sunday. "They're going to be voted out of office."

With three weeks left in the 2018 session, Scott and his fellow Republicans in the Legislature have little time to respond to the Parkland tragedy.

And Scott, who may want to be Florida's next U.S. senator, is listed as an invited speaker at the NRA's annual meeting in Dallas in May, according to the NRA's website. It's an event the NRA says is "a must stop for candidates seeking the highest levels of elective office."

— With reporting by Lawrence Mower