Shooting hits painfully close for Moskowitz, who graduated from the high school 19 years ago 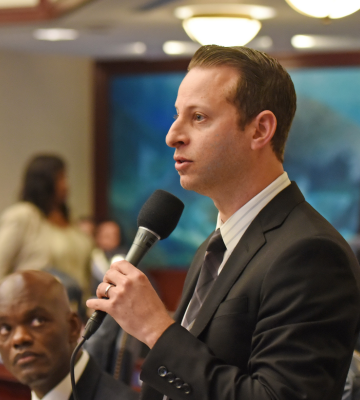 Rep. Jared Moskowitz, a 1999 graduate of Marjorie Stoneman Douglas High School, said the shooting is painfully close to home. His children go to school in Parkland, the school is blocks from his home, and he represented the district first as a city commissioner and now as a legislator.

"I'm going to know these children, their teachers, their parents,'' said Moskowitz, a Democrat from Coral Springs, as he boarded a plane back home on Wednesday. "Their lives are forever changed, families are broken and shattered and the kids who walked out alive won't be the same.
"Even though it's local, the scene around the country is all too familiar to me,'' he said. "It's unimaginable to go to a place everyday and think that it's safe and then have some loser to come in and take that away.
Moskowitz noted that the mass shooting, following the shooting at the Fort Lauderdale airport a year ago, and the Pulse Nightclub in Orlando in June 2016, has now left Florida Gov. Rick Scott with an unfortunate legacy.
"Through no fault of his own, the governor has more experience with this than any governor currently serving,'' he said.
After boarding the plane, he tweeted:

Hell is waiting for this shooter. But that’s not good enough. Nothing can replace the loss of a child. For one kid to take them away from their life and parents is beyond our comprehension. This country and its elected leaders collectively have failed our children. I am on my way