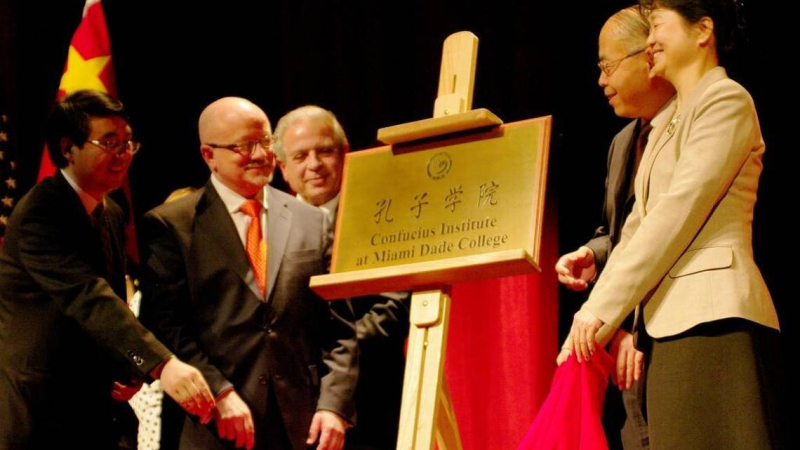 The top FBI official said his agency is investigating the Confucius Institutes, a Chinese government-affiliated institution operating at Miami Dade College that has been criticized and canceled at some American universities over concerns about propaganda and censorship.

"We do share concerns about the Confucius Institutes, we've been watching that development for a while," FBI director Chris Wray said during a Senate Intelligence Committee briefing on Tuesday. "It's just one of many tools that they take advantage of. We have seen some decrease recently in their own enthusiasm and commitment to that particular program but it is something we're watching warily and in certain instances have developed appropriate investigative steps."

Wray was responding to questions from Florida Republican Sen. Marco Rubio, who sent a letter last week to Miami Dade College and three other Florida colleges along with Broward County’s Cypress Bay High School urging them to disassociate themselves from the Confucius Institutes.

"It is my view that they are complicit in these efforts to covertly influence public opinion and to teach half-truths designed to present Chinese history, government or official policy in the most favorable light," Rubio said to Wray. "Do you share concerns about Confucius Institutes as a tool of that whole of society effort and as a way to exploit the sort of naive view among some in the academic circles about what the purpose of the institutes could be?"

In November, Miami Dade College president Eduardo Padrón referred to the institute as “a treasure in our community.” The college praised the program as “a relentless driver of positive social change through the expansion of community education and enrichment services in Chinese language and culture.”

Rubio's comments came during an open hearing with top intelligence officials to discuss world wide threats. Rubio used his line of questioning to ask about Chinese infiltration of the U.S. academic community.

"We have intensive studies going on throughout the intelligence community relative A to Z on what China is doing," Director of National Intelligence Dan Coats said.

The Confucius Institutes are also viewed by detractors as a quiet way for the Communist Chinese government to spread its influence across the world through classes over which it holds tight editorial controls that are written into its contracts with host universities. In addition to Miami Dade College, there are also programs at the University of South Florida, the University of West Florida and the University of North Florida.

The University of West Florida said it would not renew its contract with the Confucius Institutes after Rubio sent his letter last week.

This post was updated to include the University of West Florida's decision not to renew the Confucius Institutes' contract.