Gov. Scott signs 'resign to run' bill, forcing lawmakers to choose to keep their seats or run for Congress 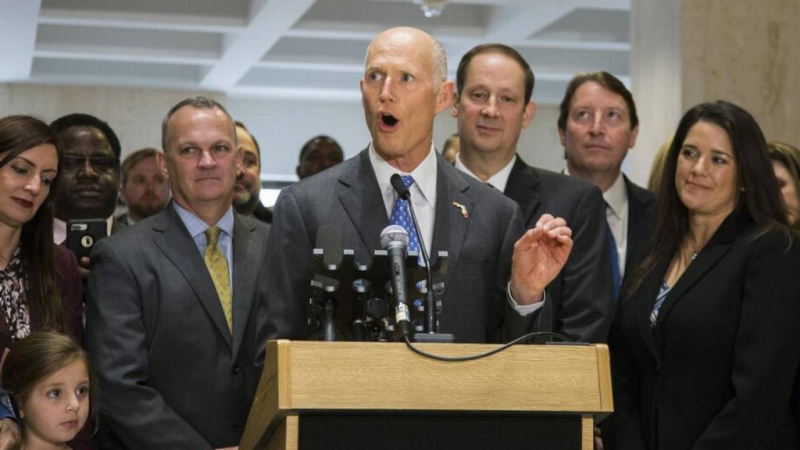 Florida Gov. Rick Scott speaks after the end of the legislative session at the Florida State Capitol in Tallahassee on March 11, 2018. Flanking Scott are Speaker of the House Richard Corcoran, left, and Senate President Joe Negron. Mark Wallheiser AP

Gov. Rick Scott on Friday signed a bill that would require local and state lawmakers to resign from their current seats in order to run for Congress.

The so-called "resign to run" bill now forces nearly a half-dozen local and state lawmakers to choose between holding onto their current seats or take the risk of running for the Miami congressional seat that Ileana Ros-Lehtinen is retiring from.

Normally, seats on the board are filled by the governor, but the bill allowed the Palm Beach County Commission to fill the two new seats. County commissioners were pushing for the bill so they could have more oversight over the troubled agency.

But Scott vetoed it, saying that the new seats should be filled by the governor.

The governor on Friday signed HB 215, a motor vehicle bill which included a controversial amendment that allows Florida International University to open a road to its Biscayne Bay campus through an environmental preserve in North Miami.

The university had cited the Parkland shooting in its arguments that the current campus, which only has one road in and out, needed a second entry and exit point for school safety. Efforts to open up a second road through the preserve have been brought repeatedly before the Legislature since at least 2011.

Despite opposition from local officials, the FIU language was successfully added to the motor vehicle bill in the waning days of session.