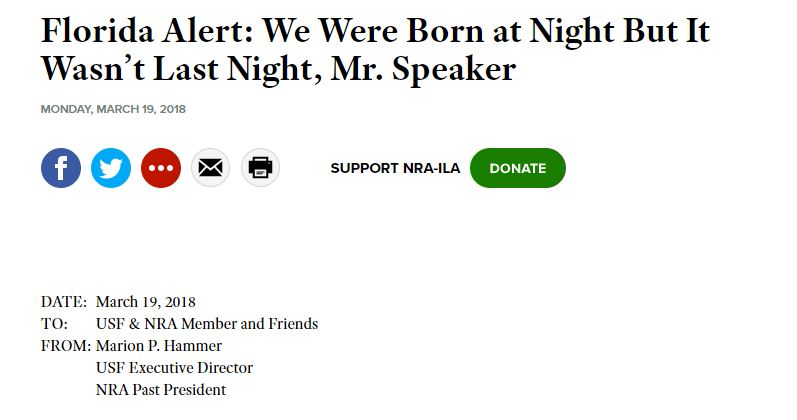 A screen grab from the NRA email blast

As Republican Florida House Speaker Richard Corcoran mulls over a run for governor, the National Rifle Association signified in an email blast Monday that it won't be making things easy for him.

"Speaker of the House Richard Corcoran (R) is adding insult to injury by calling the betrayal of law-abiding firearms owners 'one of the greatest Second Amendment victories we've ever had,'" reads the release, written by longtime Florida NRA lobbyist Marion Hammer. "That is complete nonsense and ignores the unconstitutional gun control included in the bill."

Although the post does not mention Corcoran's potential run for governor, it appears to be the first about any of the candidates in this race.

Hammer is referencing a report by the Sarasota Herald-Tribune, in which Corcoran talked about the Legislature's response to the Marjory Stoneman Douglas shooting while he attended the Lakewood Ranch Republican Club's monthly meeting.

According to the paper, Corcoran was specifically referring to the measure to end "gun-free zones" on school campuses through an optional program to arm school staff. The new law, already signed by Gov. Rick Scott, is tied to $400 million's worth of funding for more mental health professionals and armed cops on campus.

It also prohibits the sale of bump stocks, raises the minimum age to purchase any firearm from 18 to 21 and creates a three-day waiting period for gun buys — problematic for the NRA.

Corcoran was previously given an "A" rating from the NRA, but has stood firm with moderates in the Florida Legislature that the bill was the right thing to do following the deaths of 17 students and staff in Parkland. The NRA announced it is suing the state merely hours after Scott signed it.

Corcoran, an underdog in terms of fundraising and name recognition, has said he will decide in coming weeks if he will join the Republican race for governor.

If so, he will likely face more attacks from the right from his opponents, Commissioner of Agriculture Adam Putnam and U.S. Representative Ron DeSantis.

Putnam has said he is against raising the age to purchase a gun, meanwhile on Fox News, DeSantis predicted the Constitution will be on the side of the NRA.