CFO Patronis refused to meet with banking regulator, despite concerns about his "leadership" 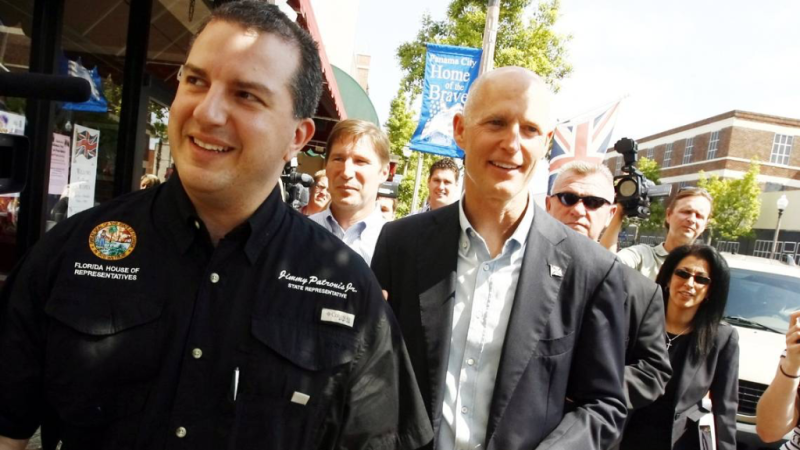 Just hours after criticizing the state's banking regulator for his "lack of cooperation, responsiveness and communication," Florida Chief Financial Officer Jimmy Patronis refused to meet with him, citing concerns about violating the state's sunshine law.

Last week, Patronis sent a surprise email to Office of Financial Regulation Commissioner Drew Breakspear, telling him he no longer had confidence in Breakspear's leadership and that he planned to bring it up at next week's Cabinet meeting.

His email was then sent out to the press.

A few minutes after that, Breakspear emailed Patronis: "Do you have time to meet today or tomorrow as I would like to have the opportunity to discuss this with you?"

No, Patronis awkwardly replied nearly four hours later, according to the email exchange:

"Thank you for your reply," Patronis wrote. "I do not want you to serve, deliberately or inadvertently, as a conduit with another member of the commission prior to the Cabinet meeting. In order to ensure a transparent process conducted in the sunshine, I will discuss my concerns during your assessment review."

Patronis spokesman Jon Moore said Wednesday that the CFO "has developed growing concerns regarding the Commissioner’s ability to serve Floridians," and that he wanted to address them in public only.

Simply speaking with Breakspear would not violate the state's sunshine law, according to Barbara Peterson, president of the First Amendment Foundation.

She said it sounded as if Patronis was concerned about Breakspear sharing details of their conversation with other Cabinet members. That could be a violation of the law, but Peterson said there is "always the potential for sunshine violations whenever he talks to anybody" about Cabinet business.

"I don’t see a particular threat here. But we always applaud government officials for being careful," Peterson said. "I’m just not sure this is out of an abundance of caution or because he doesn’t want to talk to the guy."

She said Patronis has "a good reputation on open-government issues" and is highly knowledgable about the state's sunshine law from his time as a representative in the state Legislature.

Breakspear's assessment review was scheduled for next week's Cabinet meeting, but the meeting was rescheduled for next month. Breakspear works for the four-member Cabinet, made up of Patronis, Gov. Rick Scott, Attorney General Pam Bondi and Agriculture Commissioner Adam Putnam.

His review gives no hints as to why Breakspear was underperforming. According to performance metrics, Breakspear scored 3.35 out of 5 - a rating that "meets expectations."

In his self-evaluation, Breakspear noted that he reduced employee turnover in the last year from 17 percent to 12 percent, and he touted a new check-cashing database created to detect fraud. The database is scheduled to be completed this year.

But Breakspear has long been a target of Gov. Rick Scott. He was in the hot seat in 2015, when Scott told the Cabinet that he wanted to fire him for reasons the governor never disclosed. Apparently without enough votes on the Cabinet to oust him, Breakspear stayed in the job and the controversy subsided.

Still, Patronis' email blasting Breakspear came out of nowhere, surprising and confusing members in the financial sector. (Breakspear has been in charge of licensing and regulating banks, check-cashing stores and payday loan companies since 2012.)

Scott, who is running for U.S. Senate, only has a few months left in his term, and some observers assumed that such Cabinet appointees would be re-evaluated after this year's election, when at least two members of the Cabinet will be replaced.

Patronis, appointed by Scott last year, is running for election this year.