« Levine's money has him ahead in Florida's Democratic primary. But will his lead hold? | Main | Making room for the governor's budget staff, DOR's Biegalski ousts division leaders with no explanation » 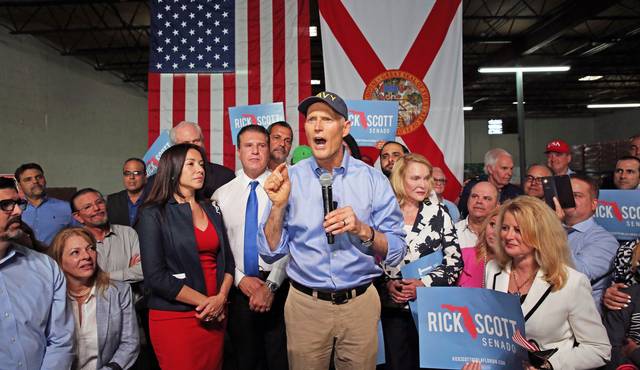 A new poll from Florida Atlantic University shows that Gov. Rick Scott's television advertising blitz could be paying early dividends. The outgoing Republican governor challenging Democratic Sen. Bill Nelson in November has a four 44 to 40 percent lead with 16 percent of voters undecided, a six-point swing from a FAU poll taken in late February which showed Nelson leading 40 percent to 38 percent.

But the race remains tied at 45 percent among poll respondents who said they're likely to vote in November.

“The Senate race in Florida continues to be very close and is going to be one of the most expensive and competitive contests in the nation,” said Kevin Wagner, Ph.D., professor of political science at FAU. “President Trump’s approval ratings in Florida are edging up, and if that continues, it could help Rick Scott and other Republicans on the midterm ballot.”

Nelson and Scott's U.S. Senate race is expected to be one of the most expensive in U.S. history.

In the governor's race, Republican Rep. Ron DeSantis (16 percent) and agriculture commissioner Adam Putnam (15 percent) are effectively tied with each other, and no other Republican reached double-digit support. On the Democratic side, former Miami Beach mayor Philip Levine (16 percent) and former Rep. Gwen Graham (15 percent) are running in a dead heat with businessman Chris King (10 percent) in third. Tallahassee mayor Andrew Gillum (6 percent) rounds out the field. The majority of voters from both parties are unsure of how they will vote in the August primary election.

The survey, which polled 1,000 Florida registered voters May 4-7, was conducted using an online sample supplied by Survey Sampling International using online questionnaires and via an automated telephone platform (IVR) using registered voter lists supplied by Aristotle, Inc. The survey has a margin of error of 3 percentage points. Responses for the entire sample were weighted to reflect the statewide distribution of the Florida population. The polling results and full cross-tabulations are available at www.business.fau.edu/bepi.