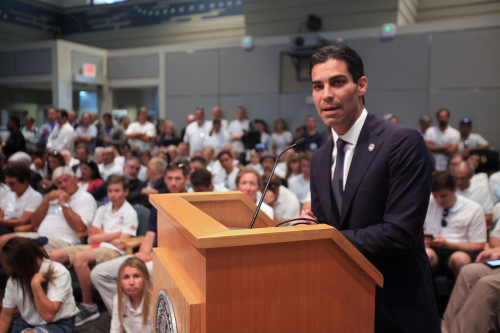 Miami Mayor Francis Suarez has so far funneled $100,000 of leftover cash from last year's mayoral campaign into his strong-mayor ballot initiative this year.

Through a petition, Suarez wants to get a referendum on the November ballot that would ask voters if they want to transform Miami's municipal government and make him the city's top administrator, a strong mayor who would run the city's day-to-day operations, making recommendations on the awarding of city contracts and overseeing public projects and employees.

The strong-mayor committee's total haul through April is $125,183.

The next biggest contributor is notable name in the realm of strong mayors — auto magnate and philanthropist Norman Braman. Braman cut a $25,000 check to the committee in April.

Braman told the Miami Herald he isn't supporting Suarez specifically so much as he is supporting the concept of a strong mayor. He said the city's top executive should be elected because it means that person will be directly accountable to the voters.

"I think voters vote for a mayor as an executive, but he doesn't have any power," he said, adding that he didn't see the change as a "grab for power."

"It's important to have accountability," he said.

Braman's no stranger to the ultimate act of accountability in electoral politics. He spearheaded the recall campaign against former Miami-Dade Mayor Carlos Alvarez, whom voters ousted in 2011. Alvarez was the county's first strong mayor after he convinced voters to move the county's vast bureaucracy under his direct control in 2007.