Ron DeSantis's pro-Israel positions take spotlight with embassy move. But they've won him donors all along. 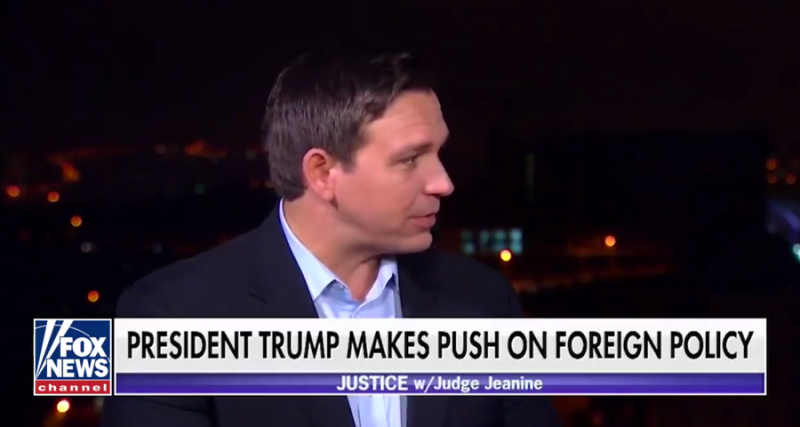 Being governor of Florida isn't a position one typically thinks of as having major foreign policy sway, but Congressman Ron DeSantis's campaign has nevertheless raked in major donations for his pro-Israel stances.

His positions have been put on display recently, as DeSantis traveled to Israel for the controversial opening of the new U.S. embassy in Jerusalem. DeSantis is a member of the House Foreign Affairs Committee and met with Israeli Prime Minister Benjamin Netanyahu as part of a congressional delegation along with Gov. Rick Scott, who all posed with Netanyahu for photos posted on the leader's Twitter account.

Today is an historic day that constitutes a milestone in the history of our people, our state, and our alliance. 🇮🇱🇺🇸 pic.twitter.com/uGLfYHf2PN

Monday's opening of the Jerusalem embassy, a major priority for President Trump, was met with violent protests killing at least 60 in Gaza, according to national media reports.

Before DeSantis even announced his campaign for governor, Las Vegas casino magnate Sheldon Adelson signed on to be on his "national finance team," essentially committing to a major donation. Adelson is a billionaire political "kingmaker" who switched from the Democratic to the Republican party in part because he felt Democrats have become anti-Israel. He donated a record $25 million to the presidential campaign of Trump, who has supported DeSantis on Twitter.

Adelson and his wife were also in Jerusalem for the ceremony opening the new embassy.

DeSantis's political committee also took in a $250,000 check back in November from Bernard Marcus, the retired co-founder of the Home Depot who now lists his address in Boca Raton. Marcus helped found the Israel Democracy Institute in Jerusalem in the '90s and has long donated to Jewish causes.

Additionally, Cherna Moskowitz, wife of the late Irving Moskowitz whose foundation supports causes in Israel, has donated $150,000 to DeSantis. According to campaign finance records, she lives in Miami Beach and has never donated to any other Florida campaign save a small $500 check to state Rep. Scott Plakton back in 2012.

Many pro-Israel groups and donors have also been vocal opponents of the Iran nuclear deal, which DeSantis has railed against on Twitter as a "disaster." Trump announced the US's withdrawal from that agreement on May 8.

Brad Herold, spokesman for the DeSantis campaign, said no donors to his knowledge have been nudged by the president to give to DeSantis.

"The Florida governor has unique position among governors when it comes to the issue of Israel, both from the fact that we have so many Jewish-Americans in the state but also because we have a such a close business relationship with Israel," he said. "So I think the Florida governor having a strong stance on Israel issues is important to lot of Floridians."