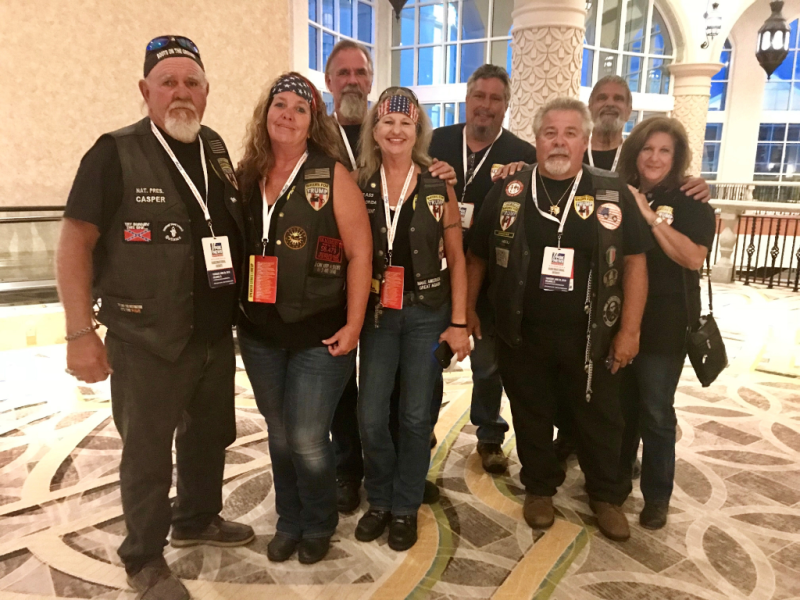 Bikers for Trump members pose for a photo at the Republican debate in Kissimmee. | Emily L. Mahoney, Times/Herald

KISSIMMEE — In the sea of about 1,000 suits, high heels and pearls at Thursday night’s debate between the top two Republican candidates for governor, a small group stood out. They were wearing leather.

It wasn’t just their appearance — a handful of members from Bikers for Trump whooped and heckled from the audience during the nationally televised debate, even shouting answers to questions about deporting undocumented immigrants before the candidates started speaking,

The bikers said they rode their bikes from the Panhandle down to Kissimmee Thursday morning to attend the debate after they were specially invited by Ron DeSantis’s campaign. They posed for photos and said they were welcomed by all.

“I think watching DeSantis tonight was like watching Donald Trump and Hillary. I think Ron actually walked all over Adam Putnam,” said R.C. Pittman — though his friends call him “Casper” because he doesn’t have any tattoos on his pale skin. He’s a seventh-generation northwest Floridian, and said he was the national president of Bikers for Trump.

Bikers for Trump is a national organization of about 3,500 bikers that rose to prominence in 2016, making their presence known at Trump rallies across the country and even at the Republican National Convention in Cleveland, typically an event catered to insiders and elected officials.

According to its website, the group was started “to connect patriotic bikers” and “to inform voters” and explicitly says on its website that it does not endorse violence, “nor do we endorse confrontations with paid protestors.”

The Florida chapter has about 350 members. Pittman said he’s attended more than 70 rallies and debates across the country, he said, putting 75,000 miles on his motorcycle.

“The only time I was out of place was when I went with Gov. Scott to Jackson County,” Pittman said, chuckling. “The (organization he addressed) in Jackson County is 90 percent women over 80 years old and I walked in there with a group of bikers and scared the hell out of them.”

He said he’s known Congressman Matt Gaetz’s family for years — calling his mother a “lovely woman” — and so the group provides a Harley-style escort to Gaetz with a minimum of 10 bikes every time he’s campaigning in the Panhandle. They’ve only recently begun supporting DeSantis, Pittman said, but they like what they hear from him.

And the news that Harley Davidson is moving some its production overseas? They don’t believe that’s Trump’s fault, despite the fact the announcement came the same month he slapped on steep steel and aluminum tariffs on the EU, Mexico and Canada, prompting steep tariffs on the U.S. motorcycles in return.

“Harley was going to leave before the tariffs,” said Debbie Liston, the group’s Northwest Florida chapter’s vice president who was also at the debate, wearing an American flag bandana with her leather vest. “They were looking to leave anyway to find cheaper labor and ship them back so they’re using the Trump tariffs as an excuse.”