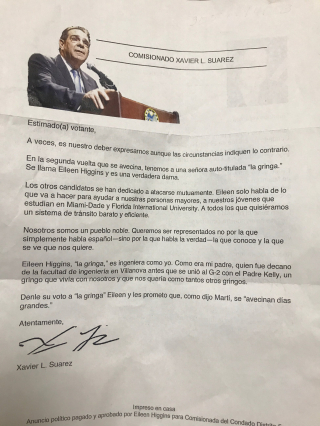 In a city where ties to communism can still wreck a career and reputation, a county commission candidate sent out an endorsement letter from Miami's first Cuban-born mayor mistakenly stating that his father had "joined" Fidel Castro's secret police in the early 1960s.

The blunder, which Eileen Higgins' campaign blamed on an editing error, butchered the truth: Xavier Suarez's father was actually imprisoned by the intelligence service in 1961 ahead of the CIA-backed Bay of Pigs invasion. But voters in Miami-Dade County's fifth district nevertheless received a letter from Suarez late last week oddly explaining that he supports Higgins and his father once teamed up with Cuba's G-2 — an unforced error for Higgins, who is courting Hispanic and Cuban voters.

“I’m a little miffed, I suppose,” said a nonchalant Suarez, who stressed that he remains supportive of Higgins. “I think everybody understands from the context” what happened.

The mix-up began when Suarez sent a letter of endorsement to Higgins, who's running to replace the Cuban-born Bruno Barreiro in a June 19 runoff election as the commissioner representing Miami-Dade's fifth district. Higgins' opponent is Barreiro's wife, Zoraida Barreiro, who came to Miami in the 1980s as part of the Mariel boatlift.

The letter, which Suarez provided to the Miami Herald via email, was written in Spanish. In it, he explained that his father, Manuel Suarez, was an engineer like Higgins, and compared his support for Higgins to his father's friendship with a priest who served as rector of the university where his father was dean of the school of engineering in Cuba. Suarez also mentioned that his father and Father John Kelly were detained by Cuba's military intelligence before the Bay of Pigs invasion.

But Higgins' campaign ultimately sent out an edited version that mistakenly replaced the phrase "was taken" in that sentence with "joined." Higgins' campaign blamed the mistake on hasty preparations to distribute the letter to voters as absentee ballots also hit the mail last week.

"In the process to quickly finalize the letter to reach voters in the shortened election cycle, a staff member inadvertently made a small edit to a sentence and the change was made in the wrong paragraph," said Kalynn Cook, a spokeswoman for the Higgins campaign. "The overall message and feel of the endorsement letter remains intact."