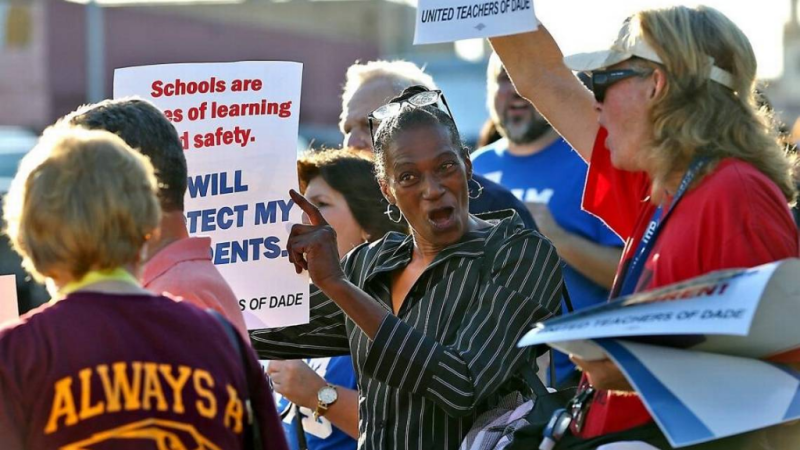 Virginia Ducksworth, center, joined the United Teachers of Dade in January 2017 as the union protested the nomination of Betsy DeVos as Secretary of Education. PATRICK FARRELL pfarrell@miamiherald.com

The Florida Education Association is about to make good on its pledge to sue the state over new law that makes it easier to decertify teacher labor organizations.

It announced Friday its plan to  file suit Monday against the measure, which passed in the spring as part of the controversial education omnibus HB 7055. Its goal is to stop implementation of the rule, which requires unions to have half of all eligible participants become paying members or face loss of their collective bargaining role.

"My locals are all going to be over 50 percent," FEA president Joanne McCall told the Gradebook on Friday. "This is about equity and fairness, and being targeted and singled out."

Lawmakers applied the new rule only to teacher organizations, and not to any other public employee groups.

Incoming legislative leaders said they were not surprised by the legal maneuvering.

"I can't remember a time where I've been in the Senate where we did not have one lawsuit or another over education or education funding," said incoming Senate president Bill Galvano.

"But I mean what I said (during a Friday panel): If you focus on the student, then all forms of education are important," Galvano continued. "I believe in traditional public schools as well, I've raised money for public schools in my private life. That's important to me, in my father's name. But at the same time they have to back away from that institutional view and start looking at the student view, and I don't think the suit will be successful."

Incoming House Speaker Jose Oliva questioned why the FEA becomes so concerned when choice enters the education system, whether for educators or students.

"They must have a special interest of their own that they're trying to protect," Oliva said. "It doesn't surprise me that they're filing a lawsuit and chances are over the next few years they're going to have many more reasons to file lawsuits if choice and education are problems for them."

The FEA battled the proposal from when it first became a stand-alone bill, through its inclusion in HB 7055. It won some, but not enough, support from Republicans who also viewed it as unfair.

The concept narrowly passed the state Senate, where it had been expected to falter. Supporters suggested that if the unions wanted to represent all teachers in contract talks, they should be able to prove that the majority supported the union.

Lawyers for the FEA threatened to sue from the moment the bill passed.

Ron Meyer, who will represent the association, said in the past that the plan had constitutional flaws and would not withstand court scrutiny. He is scheduled to hold a press conference on Monday to discuss the details of the suit.

McCall said she expected the case to focus on three legal points, but she did not have specifics. Meyer was not available for comment Friday.

Sen. Dennis Baxley, one of the bill's chief proponents, said he had no problem with the FEA's plan.

"I'm never offended if someone decides to file a lawsuit for legal interpretation," Baxley said.

He explained that he backed the measure as a way to ensure that the organizations bargaining on behalf of all teachers really speak for the entire work group, and districts are negotiating with the right people.

"I was accused of union bashing," he noted. "In fact, I don't know what we've done. I might have helped further the union" if more members join to support the effort.

As of last week, she said, four had surpassed the level, and three were within a percentage point. Six were "very close" but have several months before they must renew their state registration, and the remainder have more than a year to meet the mark because they renewed before the law change takes effect July 1.