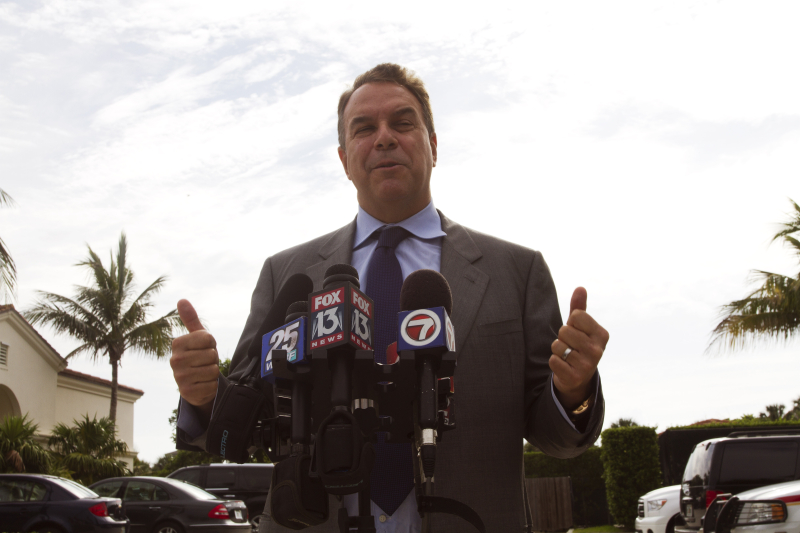 Amid speculation that he'll spend tens of millions of his own dollars in order to get elected, real estate tycoon Jeff Greene announced Tuesday that he's dropping $2.9 million this week to air two commercials statewide as he seeks the Democratic nomination for governor.

Greene began running two commercials Tuesday, one in which the Palm Beach billionaire explains how his dad lost his job and later died of a "massive heart attack" at age 51 under the pressure of supporting his family, and another in which he stresses his opposition to President Donald Trump. The latter includes a clip that seems to show Greene and Trump jawing at each other, as a narrators says Greene "is the only candidate in America willing to stand up to Trump in his own dining room."

You can see the ads here

According to Greene's campaign, the video was taken in December of 2016 at the Trump International Golf Club in Palm Beach, where Greene was attending a friend's birthday party. Greene was crossing the room when Trump, at the time the president-elect, noticed Greene and remembered that Greene had supported Hillary Clinton and bad-mouthed him on national TV.

The video sets a different narrative than one Greene, a Mar-a-Lago member, helped create shortly after Trump was elected when he called for the country to unite behind Trump and give him a chance. He recently told the Miami Herald that he'd hoped Trump's rhetoric was just campaign shtick, but quickly lost hope that the president would strike a more conciliatory tone in office and now completely opposes him.

Greene has ground to make up if he's going to win the Democratic nomination in August. Polls have shown that he has retained little to none of the name-recognition he earned in 2010 when he spent $24 million of his own money in an unsuccessful bid for U.S. Senate. But it helps to have money, as Philip Levine has shown in spending more than $10 million on commercials since November on his way to becoming the race's frontrunner.

Greene has thrown out gaudy hypothetical numbers when asked how much he may spend on his own campaign. Tuesday's ad blitz, which includes digital spending, should only be the beginning.