Remember when Cabinet meetings used to focus on agency oversight? 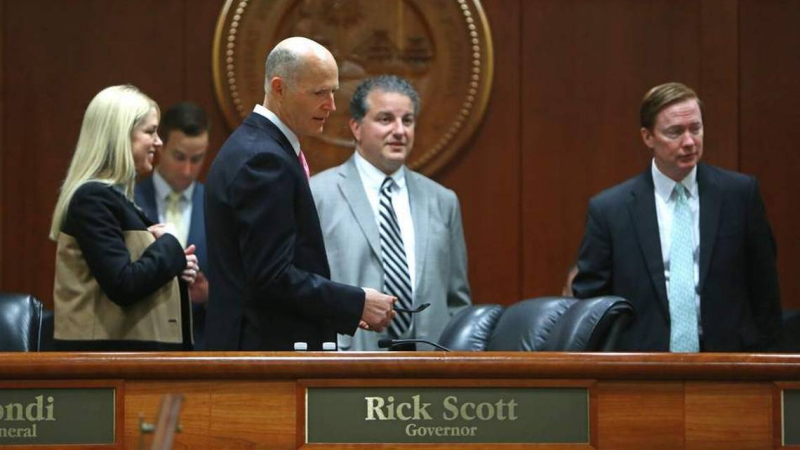 The state agency in charge of regulating taxation in Florida has four equal bosses — Gov. Rick Scott and the three elected members of the Cabinet — but in the past two years, in public meetings and correspondence, they have asked few questions and have given the agency scant public scrutiny.

The agency's director, Leon Biegalski, was the governor's choice to lead the Department of Revenue when he was elevated from deputy secretary at the Department of Business and Professional Regulation in April 2016. Since then, the governor has canceled DOR's regular appearance in 9 of 19 before the Cabinet meetings.

When Biegalski appears before the Cabinet on Wednesday, it will be the first time this year. Will they ask any questions?

Judging from the transcripts of the previous meetings, that's not likely. Scott, Attorney General Pam Bondi, Chief Financial Officer Jimmy Patronis and Agriculture Commissioner Adam Putnam asked only two questions in Biegalski's 10 appearance before them — and both came from Putnam. Story here.

Until Scott's tenure, the Florida Cabinet had a tradition of meeting every other week.

Florida, unlike most other states, has a unique power-sharing relationship between its governor and the Cabinet members. They share oversight and hiring authority of the directors of the departments of revenue, law enforcement, highway safety, the division of bond finance and the state board of administration.But the shared role also underscores the structural weakness of Florida's governor in controlling the shared agencies and Scott has ratcheted down the amount of substantial dialogue that takes place during Cabinet meetings.

In the last seven years, Cabinet sessions have been more ceremonial and less substantive. More time is devoted to award ceremonies than under previous governors, and a regular feature is Bondi’s promotion of offering dogs for adoption.

Scott, who is running for U.S. Senate, sets the calendar and has convened only three Cabinet meetings this year. He scheduled eight meetings for the entire year, the fewest in recent memory, and canceled the meeting in May.

When the Cabinet had both Democrats and Republicans on it, there were more questions of agency heads in the public forum than there have been under Scott.

At a Nov. 20, 2008, Cabinet meeting, as former Revenue Director Lisa Echeverri Vickers presented her legislative budget request and annual performance report, former CFO Alex Sink grilled her about enforcement of tax revenue collection. Vickers acknowledged that she is asking for more auditors to help them collect the unpaid taxes.

Sink, a former banker and a Democrat, then asked about tax collections on short sales, a policy based on the rule because the Legislature failed to pass a statute, and the agency's application of "a glitch in the depreciation laws" that had left many businesses vulnerable.

The discussion provided an opportunity for the public to hear the agency's response to handling two important issues in an open forum.

Under Gov. Jeb Bush, former Revenue Director admitted during his annual performance review on Sept. 21, 2004, that the measures related to review of property appraisers "were fairly easy to achieve."

"Well, we want to do better than that,'' Zingale responded.