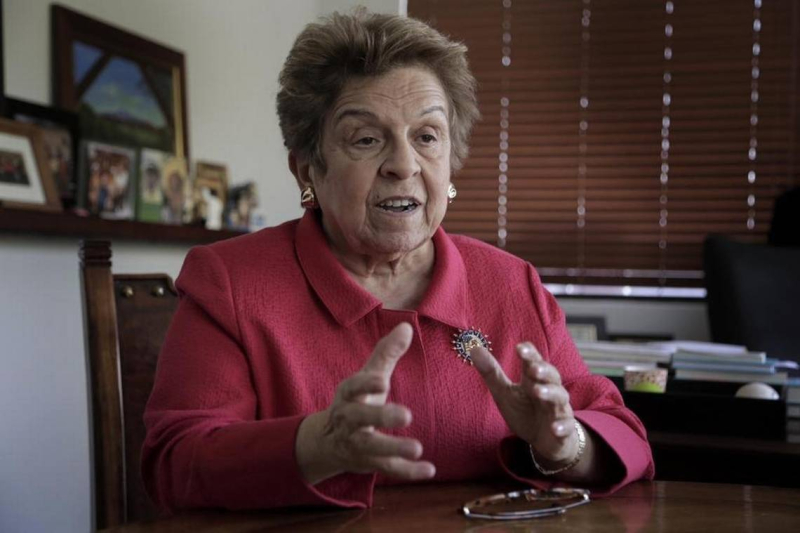 Donna Shalala has been attacked by her opponents in the press, at debates and on TV for months now in a brutal Democratic primary to win a high-profile Miami congressional race, but a new internal poll suggests she’s still the clear frontrunner.

A poll conducted by Bendixen & Amandi International found that were the Democratic primary for Florida's 27th congressional district held in early June, Shalala would have taken 43 percent of the vote in the five-way contest. Her closest competitor, David Richardson, netted 16 percent, with Kristen Rosen Gonzalez at 8 percent, Matt Haggman at 5 percent and Michael Hepburn at 2 percent.

A little more than a quarter of likely voters were still undecided little more than two months out from the Aug. 28 primary, which will decide who will face the Republican nominee in the campaign to replace the retiring Ileana Ros-Lehtinen in Congress.

The poll was conducted through live bilingual interviews with 600 likely Democratic voters from June 2 through June 8. The margin of error was four percent. As with all internal polls, the results should be taken with a grain of salt.

The survey, though, is the first published since Shalala’s campaign released a poll conducted in January, and the first since the field dwindled to five and the ballot was set for the Democratic primary. It was conducted after Richardson launched a TV and mail campaign that harshly attacked Shalala's record, and before longtime friend Hillary Clinton endorsed her campaign Monday.

The results are also fairly consistent with an independent poll given privately in April to POLITICO, which reported that Shalala was pulling 40 percent of the vote at the time.

But it’s not all bad news for Shalala’s opponents, who threw shade at the numbers Wednesday and said the poll was already outdated.

While Shalala is known among two-thirds of the voters in the district and the number of undecided voters has dwindled, the poll found her opponents remain largely unknown, suggesting they still have room to snare some of her voters as they roll out their campaigns and voters begin to pay more attention to the race. Richardson’s ad blitz -- which began in May and is ongoing -- also boosted his numbers, and Haggman only began airing his first television commercial Wednesday. Rosen Gonzalez has maintained that her own, informal queries show her in a much different position.

"We have the resources to make sure all of the voters hear our message, and we will be rolling out more ads in the next few weeks," said Helena Poleo, a spokeswoman for the Haggman campaign. "This poll was conducted before our ads were up, so these numbers don't mean much."

And while their attacks didn’t appear to have knocked down Shalala’s lead by early June, they did appear to have kept it from growing further considering that her “unfavorable” numbers grew from 8 percent in January to 18 percent in June. The poll also found lower favorable numbers for Shalala in June (46 percent) than the independent query released to POLITICO in April (58 percent).

"In politics, when a campaign releases an old poll it always means they don't want you to know what's happening in the race today," Eric Johnson, a political strategist for the Richardson campaign, said after this blog first published. "By her own poll, Shalala's negatives were on the rise three weeks ago as voters learned how she sold out progressive values for profits. If you fast forward to three more weeks of TV and mail about her record versus David Richardson's accomplishments, the poll results would be much worse for her."