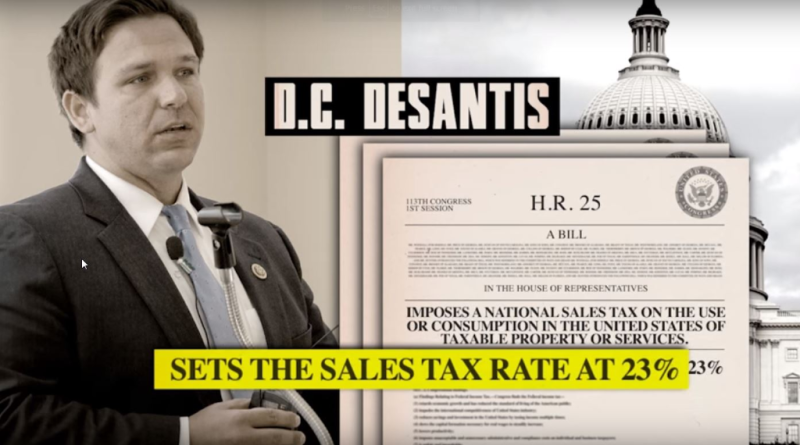 As Florida enters the final month before the primary election, the Republican race for governor will feature a brazen new TV and radio ad from the Adam Putnam campaign.

"Washington is full of bad ideas and phony politicians," the ad continues. "Ron DeSantis and his huge tax increase fit right in."

The ad's premise stems from a 2013 bill in Congress, H.R. 25, or the Fair Tax Act, which DeSantis cosponsored. It's true it pitched a 23 percent nationwide sales tax starting in 2015, with "adjustments" in later years.

But what the ad doesn't mention is that the bill would have also repealed all federal income taxes, employment taxes, as well as the estate and gift taxes. It also pitched a monthly rebate for all spending up to the poverty line, which all lawful U.S. residents would receive.

Critics of the proposal, including some conservatives, say it would unfairly impact the middle class and retirees.

All 75 cosponsors of the bill in the House were Republican. The bill never gained any traction, but has been proposed over and over for years.

While it's common for dark money groups to air negative ads, this one was paid for by Putnam's political committee, Florida Grown. It's a sign that the campaign is on the offensive for the last stretch before the primary, as Putnam fights against new polling that shows DeSantis taking the lead with a Trump event in Tampa still to come.

In an apparent reference to the ad on Twitter, DeSantis's campaign manager, Brad Herold, said Putnam was only criticizing DeSantis for being conservative.

I’ll give @AdamPutnam this. He’s finally given up on pretending to be a conservative. Things he’s attacked @RonDeSantisFL on.

1. Voting Against The Farm Bill
2. Taking On Entitlement Spending
3. Supporting the FairTax