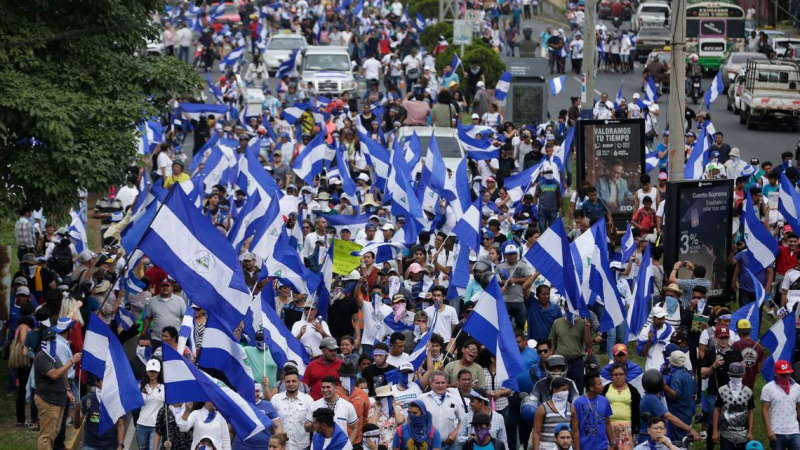 Daniel Ortega’s biggest foes in Washington are trying to draw more attention to Nicaragua’s ongoing human-rights crisis, though they acknowledge that military action by President Donald Trump against the leftist leader is unlikely.

U.S. Rep. Ileana Ros-Lehtinen and Sen. Marco Rubio of Miami are leading efforts in the House and Senate to publicly rebuke violent attacks by masked gunmen linked to Ortega’s government who have killed 97 people since July 11. This week, the House of Representatives unanimously passed a resolution written by Ros-Lehtinen that condemns the violence and calls on the use of sanctions for individuals that are connected to the killings. Rubio has proposed a similar resolution in the Senate.

The retiring Miami congresswoman said the successful resolution was the first step in a four-part plan to rebuke Ortega.

Additionally, she’s angling for the Senate to pass her bill that limits U.S. loans to Ortega’s government until the longtime president carries out democratic reforms; more sanctions for individuals who can be connected to violent acts against anti-Ortega protestors, and overturning the Trump administration’s decision to end a temporary immigration program that allowed 2,500 Nicaraguans to live and work in the U.S. without the fear of deportation.

“I would not want to compare atrocities, but Nicaragua is a smaller country than Venezuela, smaller population, and they had almost 400 people killed and the international community shrugs,” Ros-Lehtinen said. “If we’re going to say that it’s terrible in Nicaragua, why are we going to deport Nicaraguan Americans to Nicaragua when we are saying that it’s in political chaos?”

The Trump administration decided to end Nicaragua’s Temporary Protected Status in November 2017, a designation that was made in 1998 after Hurricane Mitch killed nearly 4,000 people and uprooted land mines around the country. Nicaraguans who have been living in the U.S. with TPS since 1998 now have until January 2019 to seek another form of legal residency or else return to Nicaragua.

“By next year, they will all be deported,” Ros-Lehtinen said. “These are law-abiding people, they are legal, they have permits to work, they’re being educated, they’ve got driver’s licenses and now we’re going to deport them to the violent hell that is Nicaragua? That’s just not right.”

Ros-Lehtinen’s letter to Trump urging him to change Nicaragua’s TPS designation was signed by four of Miami-Dade County’s five House members, including Republicans Carlos Curbelo and Mario Diaz-Balart. Miami-Dade is home to about one-third of all Nicaraguan Americans.

Rubio said there is already work being done to sanction individuals and entities in Nicaragua that are responsible for the violence. Ortega’s recent decision not to move up elections that were scheduled for 2021, as requested by the nation’s business community and Catholic clergy, moved him past the point of no return in Rubio’s eyes.

“There is a direct national security interest for the United States in seeing a return to democracy and stability in Nicaragua,” Rubio said in a statement. “The message from the U.S. to the Ortega regime was very clear: Call for early elections and allow legitimate elections. That did not happen. As Nicaragua follows Venezuela’s dangerous path, the U.S. should be prepared to take further action with our regional allies to address the threat of Ortega’s regime.”