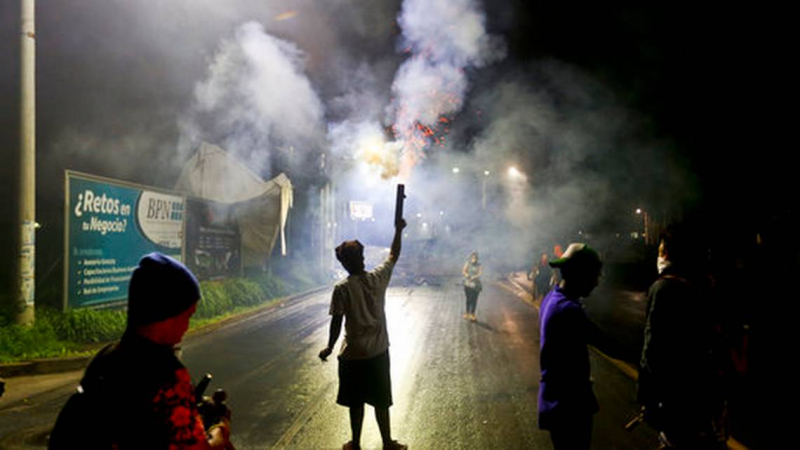 The sanctions come as Washington turns up the heat on Nicaragua, where more than 200 people have died in two months of anti-government protests.

"The United States will not stand by idly in the face of the abuses taking place in Nicaragua," a senior administration official said. "Rather we will expose and hold accountable those responsible for the Nicaraguan government’s ongoing violence and intimidation campaign against its people."

The U.S. Treasury Department is targeting three top officials for human rights abuses under the U.S. Global Magnitsky Act, which allows the executive branch to impose visa bans and targeted sanctions on individuals anywhere in the world responsible for committing human rights violations or engaging in corrupt activity.

The officials include Francisco Lopez, head of the private company ALBANISA, a joint venture between the Venezuelan state-owned oil company, PDVSA, and its Nicaraguan counterpart. They targeted Francisco Diaz, who leads the National Police and, critics charge, orchestrated the repression and killing of Nicaraguans. Diaz's daughter is married to Ortega's son.

They also targeted Fidel Antonio Moreno Briones, who the Trump administration said has directed attacks against demonstrators for years and is seen as the main link between the municipal government and the Sandinista National Liberation Front.

The sanctions means that that the targeted people don't have access to any property they have within U.S. Also, U.S. businesses or American individuals are prohibited from engaging in transactions with the sanctioned individuals.

"Under Francisco Javier Diaz Madriz’s command, Nicaragua's National Police has engaged in serious human rights abuse against the people of Nicaragua," Heather Nauert, the State Department spokeswoman said. "Fidel Antonio Moreno Briones has directed acts of violence committed by the Sandinista Youth and pro-government armed groups which have been implicated in numerous human rights abuses related to the ongoing protests against the Nicaraguan government. Jose Francisco Lopez Centeno is the vice president of ALBANISA, the president of Petronic, and the treasurer of the ruling FSLN party and has been accused of leveraging his position to his and his family’s benefit by using companies they own to win government contracts."

"Time is running out for Ortega to address the current crisis by holding early, free & fair elections," Rubio tweeted.

"As so many Nicaraguans exercise their rights to free speech and assembly, the violence in Nicaragua continues unabated with almost 300 people killed at the hands of the Ortega regime," said Ros-Lehtinen, who has introduced a resolution urging the Trump administration to impose more sanctions. "Though the State Department has rightfully imposed visa restrictions to some of Ortega's puppets, this resolution empowers the administration to go further to identify and sanction those who have engaged in acts of oppression in accordance with our laws."