« In disclosure Q and A, Scott campaign provides its own questions, then avoids some answers | Main | Parkland’s ‘most hated pro-gun advocate’ thrills conservatives » 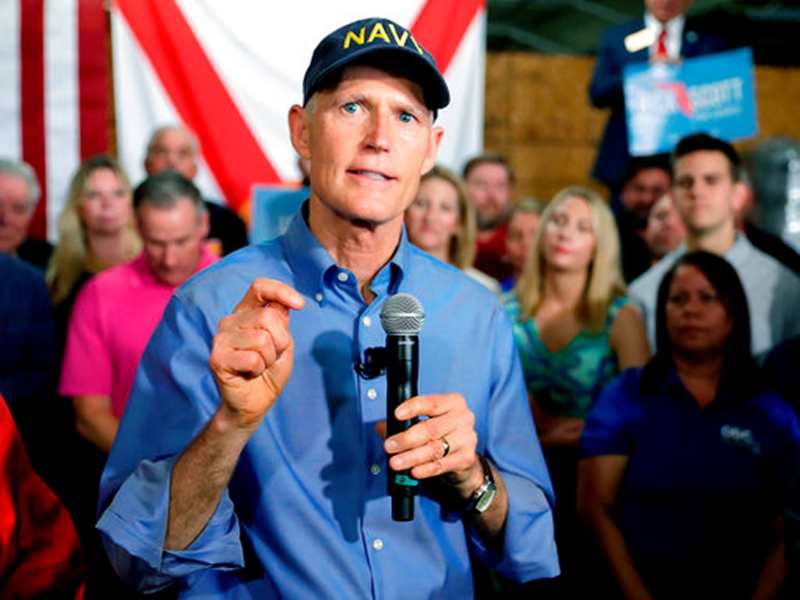 Gov. Rick Scott offered a convenient counterpoint Friday to the criticism he continues to take over his use of a blind trust to shield tens of millions of dollars in assets from public view: Florida’s wealthy Democrats will do it too.

Around the time they disclosed their own finances last month, three of the five Democrats running to replace Scott said publicly that they would either transfer their assets into a blind trust or at least consider doing so. The reason: a blind trust managed by a third party ostensibly allows a public official to make conflict-free financial decisions because they don't know what assets they hold or how and whether their decisions affect their own personal wealth.

Businessmen Jeff Greene, Chris King and Philip Levine each said last month that a blind trust was an option on the table should they become Florida's governor.

In announcing Friday that the governor filed a federally required financial disclosure that showed his net worth is north of $255 million and disclosed the assets held in his blind trust for the first time in four years, Scott’s campaign released a Q&A noting that former Florida officials Jeb Bush and Alex Sink used blind trusts before Scott ever did. And, they noted, “even now, a majority of the Democratic primary candidates for governor have committed to using a blind trust.”

But that’s not exactly true.

For one, Greene, who told the Miami Herald/Tampa Bay Times Tallahassee Bureau in late June that he’d consider using a blind trust, has since decided against the “nebulous” option, according to a campaign spokeswoman. And while King and Levine said more definitively that they'd create blind trusts, they say they have no intention of mirroring Scott’s use of his own.

The governor is being sued for allegedly violating Florida's blind trust statutes by shifting assets into his wife's name and retaining control as the beneficial owner. Critics also note that the CEO of the trustee of his trust, Hollow Brook Wealth Management, is former business associate, though Scott says his trustee has always followed rules preventing the disclosure of assets.

“You don't have to be a legal expert to see that Gov. Scott's blind trust setup doesn't pass the smell test,” said King campaign manager Zach Learner. “Florida's blind trust law lacks many of the commonsense safeguards included in federal blind trust rules. It doesn't protect the public from potential or actual conflicts of interest.”

Learner also said that King, in addition to establishing a blind trust for himself and his wife, would seek a “comprehensive review to remove all potential conflicts of interest."

By evoking the three Democrats, Scott – a common foil for Florida’s left - is probably doing their primary opponents a favor.

Andrew Gillum has stressed that he’s the only “non-millionaire” in the race. And a campaign spokesman for Gwen Graham – who says she’s placed her $13.7 million in Graham Company stock into a more standard trust in order to distance herself from the family company’s operations – says the use of blind trusts by state officials has proven problematic.

But Levine’s campaign says it’s not the blind trust that’s been the problem, but the people who oversee and use it.

“Unlike Rick Scott ... Mayor Levine will govern with the highest ethics and integrity and will always be transparent regarding his assets,” Christian Ulvert, a senior advisor to Levine's campaign, said in a statement. “As Governor, he intends to seek legal counsel on the best course of action that ensures the public’s trust is properly upheld and he will be a full-time Governor singularly focused on advancing his vision for Florida."