What Trump's visit means for Florida's GOP race for governor 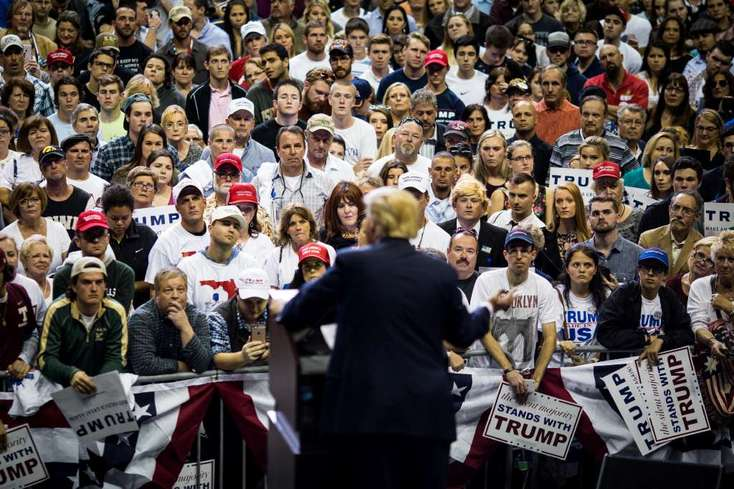 Trump speaks during a 2016 rally at the University of South Florida Sun Done in Tampa. [Tampa Bay Times]

If mere tweets of support from President Trump can skyrocket one man's campaign for governor from relative obscurity to being a front-runner ... what can an in-person visit do?

That's the question on Florida Republicans' minds on Tuesday as Tampa prepares for an evening rally intended to boost support for Trump's favorite Florida governor candidate: Ron DeSantis. Most agree it's no small moment.

It's highly unusual for a sitting president to take sides in a primary of his own party, in a state race no less. But Trump has made it clear that's exactly what he intends to do.

It was early January when Congressman Ron DeSantis announced he was running for governor — and in perfect step with his usual schedule, he did so on Fox News.

Even then it wasn't a secret that he was the favorite of President Trump's, likely in no small part because of DeSantis's constant critiques of the Russia investigation and defenses of the president. Trump has tweeted multiple times about DeSantis, calling him a "leader" and complementing his military service and Ivy League degrees.

The latest tweet was a formal endorsement, clearing any suspicion that his earlier support meant that his supporters should exclusively vote for DeSantis over his rival, Commissioner of Agriculture Adam Putnam. Since that tweet, DeSantis has surged in the polls and overtaken Putnam by a significant margin.

Putnam, a Florida political fixture, has tried to refocus this race on state issues, and has released policy "plans" throughout the campaign on issues like public safety and veterans. During a June debate in Orlando he "welcomed" DeSantis to Florida, profiling him as an out-of-touch creature of Washington.

Yet DeSantis won't bite. Other than e-verify and appointing judges to the state supreme court, DeSantis has refrained from discussing state issues as much as national ones, and it quickly became apparent at the Orlando debate that Trump would be discussed (and praised) more than any other topic. DeSantis has even been adopting some of Trump's signature hand gestures, it seems.

Read more: And the winner of DeSantis vs. Putnam debate? Trump!

Trump's outsized influence on this race was also apparent in the latest TV ads both candidates released within less than a week of each other, in the final stretch before the primary where the candidates prepare to lay down their final cards.

Putnam went for the jugular, pointing to DeSantis’s support of a Congressional proposal that would have raised the national sales tax to 23 percent – without mentioning that it also would have eliminated other taxes, like the income tax. The impact of such a radical proposal on the middle class and seniors has been disputed, and the ad was intended to strike fear about economic security.

DeSantis, meanwhile, featured his two very young children and his wife in an ad where he pretended to teach his toddler daughter how to “Build the Wall” with building blocks — and featured his 4-month-old son on a "Make America Great Again" cherry-red onesie.