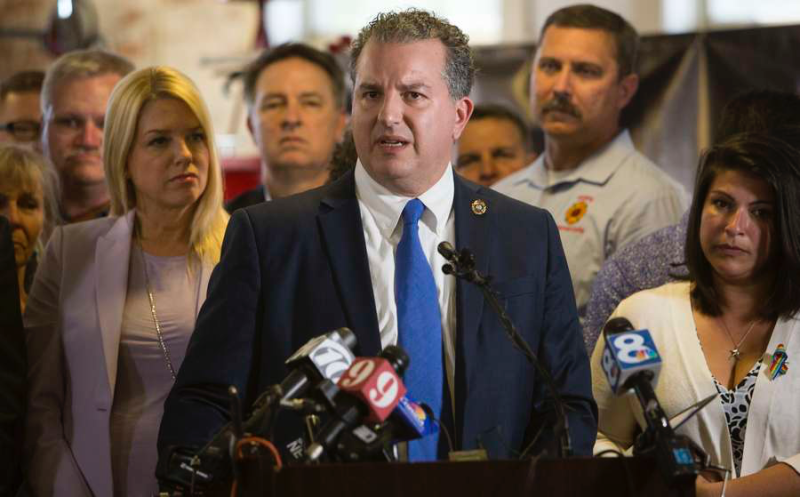 The Indiana-based researcher, Jake Wagman of Shield Political Research, used a third-party website, mydrivingreport.com, to access Patronis' driver information, according to the Florida Department of Law Enforcement report. (Wagman used to work for the Herald, according to Shield's website.)

But mydrivingreport.com had a flaw that made it easy to get information on other drivers.

To access the information, the website only required a driver's license number - information that can be easily found on traffic tickets and other publicly available police reports - and a pledge by the user that they were only requesting information about themselves.

In addition to Patronis, a Republican who is running for election this year, Wagman got information on Democratic Florida House candidate Michael Gottlieb and Tampa mayoral candidate Jane Castor.

Castor and Democratic Agriculture Commissioner candidate Nikki Fried told FDLE agents that they had hired Wagman to do political research.

For Wagman's act to be criminal, he would have had to have shown "criminal intent," and investigators found none.

FDLE agents "found no evidence that Mr. Wagman used the information he possessed and/or received for anything other than political research."

After the breach was discovered, the state canceled its agreement with Unisoft.

Wagman was never interviewed, but his lawyer told investigators that "Jake’s only intent was to find traffic violation and driving records which are public record in the State of Florida."

Patronis' campaign issued a press release Thursday morning that included a link to the FDLE report.

The campaign said his Democratic opponent in the CFO race this year, Jeremy Ring, was responsible for the breach because the Florida Democratic Party had paid Wagman. The FDLE report does not mention Ring.

"The fact that he paid the Florida Democratic Party which paid Jake Wagman, the man FDLE concludes posed as me in order to access my personal information, is a sad new low in this race," Patronis said in a statement.

Ring responded with his own statement:

"It sounds like the Patronis campaign is admitting that the only fraud comitted here was when CFO Patronis used taxpayer resources for political activities and then tried to cover it up until the press caught him red handed," Ring said.

Ring is referring to a June story in Politico, which revealed that Patronis crashed his state-issued vehicle on his way to his political consultant's office last year.

The use of state-issued vehicles for personal or political use is prohibited. And Patronis didn't reimburse the state for the $4,015.62 in damage to the vehicle until Politico started asking about it, seven months after the crash.

Patronis' campaign said he stopped using the state-issued vehicle for personal use after the wreck.