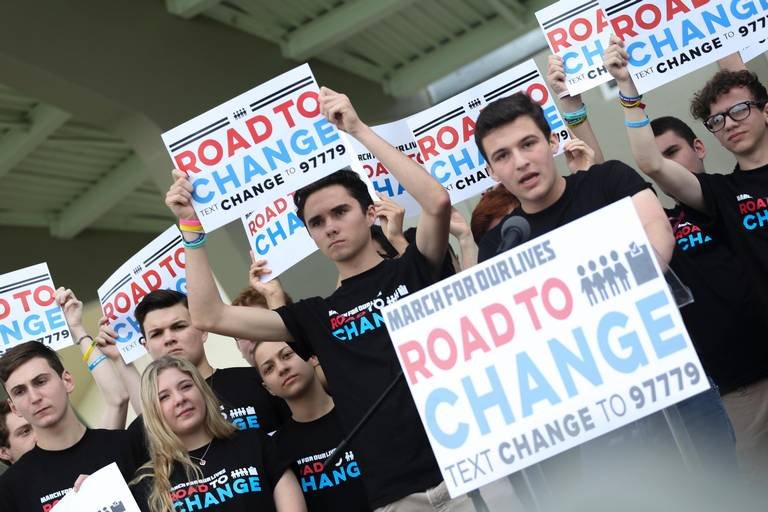 Parkland activist David Hogg appeared on MSNBC’s “Morning Joe” Thursday to announce a partnership with dozens of mayors across the country to register young voters in high school and college ahead of the general elections in November.

The alumnus of Marjory Stoneman Douglas High School, where 17 students and educators died during the Valentine's Day shooting, said dozens of U.S. mayors — including a handful in South Florida — would pledge to make resources available for a community-wide voter registration to take place Sept. 25, which will coincide with the Sept. 25 National Voter Registration Day.

As part of the so-called Mayors for Our Lives effort, named after the March for Our Lives movement against gun violence, city leaders from Parkland to Los Angeles have agreed to dedicate resources to a community-wide voter registration day on high school and college campuses within their respective cities.

“It’s a push toward the general,” said Parkland Mayor Christine Hunschofsky, who was recruited to join the effort. “The more people who are involved in the process, the better it is for democracy.”

In Florida, the final day to register to vote in the general election is Oct. 9.

During his TV spot, Hogg said young voters were critical to the victory of Tallahassee Mayor Andrew Gillum in the Democratic primary for governor of Florida — and that poll numbers don’t take recently registered voters into account.

“We had a Florida team going...to every Congressional district, all 27, in Florida throughout the summer registering thousands of new voters,” Hogg said, referring to the March for Our Lives: Road to Change voter registration tour that launched over the summer. “Our team from March for Our Lives Orlando helped promote voter registration so much that it went up 90 percent. In Florida, youth registration is up 41 percent. Those people are not taken into account in polls.”

Youth voter registration in Florida rose by 41 percent following the shooting in Parkland, according to an analysis by TargetSmart, a data firm that works on behalf of Democrats.

In Florida, the mayors of Parkland, North Miami, Pembroke Pines and Miami Gardens have pledged to help register young voters through the Mayors for Our Lives effort.

“What we’re doing with Mayors for Our Lives is we’re announcing a campaign that’s bipartisan, with Republicans and Democrats, to register a new generation of voters,” Hogg said.

Hunschofsky, who said her city saw a two-to-threefold increase in overall voter turnout compared to the last midterm primaries, said the city commission would present some of the members of March for Our Lives with a city proclamation designating Sept. 25 as National Voter Registration Day in Parkland.

She said the Broward County Supervisor of Elections would work with schools across the county to make resources available during the registration drive.