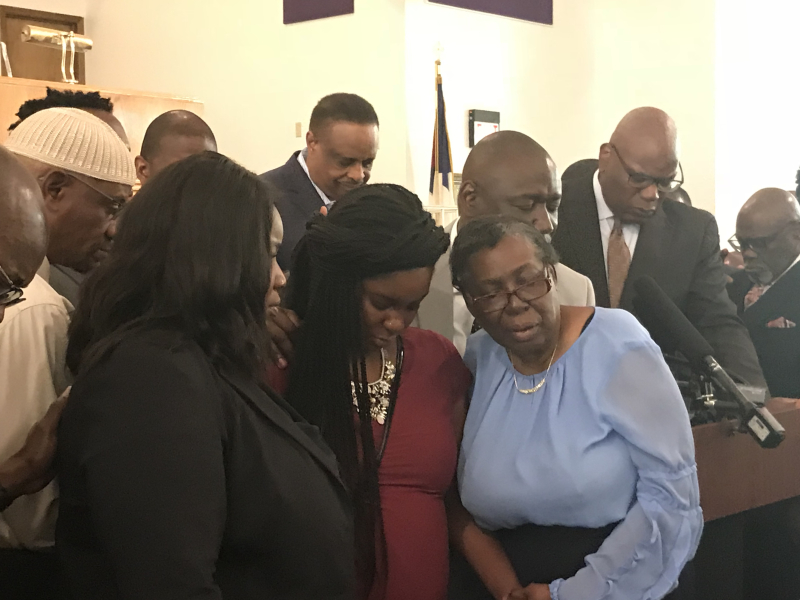 Community leaders reiterated calls to repeal the controversial “stand your ground” self-defense law Wednesday after the fatal shooting of Markeis McGlockton, marching to the Capitol to demand a meeting with Gov. Rick Scott and staging a brief sit-in before meeting with a member of his staff.

In a rally including religious leaders, elected officials and some of McGlockton’s loved ones, advocates appealed to lawmakers and singled out Scott to take action, with one calling him “the one person we can hold accountable” to temporarily suspend the law.

“Stand your ground has no place in a civilized society,” said Tallahassee Mayor Andrew Gillum, who is running for the Democratic nomination for governor and has called for a repeal of the law.

The Wednesday rally followed controversy over Pinellas County Sheriff Bob Gualtieri’s decision to declare the July 19 shooting a justified use of force under Florida’s controversial self-defense law. Michael Drejka, a white man, shot and killed McGlockton after a dispute at a Clearwater convenience store. Drejka had confronted McGlockton’s girlfriend Britany Jacobs for parking in a handicap spot. A video showed that after McGlockton exited the store, he pushed Drejka to the ground during an altercation. Drejka then pulled a gun and shot.

The dispute, advocates said, was not sufficient for McGlockton to receive what they called a “death penalty” at Drejka’s hands. Records show that Drejka had a history of road rage and was the accused aggressor in four incidents since 2012.

Jacobs said she had struggled to explain to their three children what had happened to their father: “I have to tell them he’s resting right now,” she said. “He was just protecting us.”

Attorney Benjamin Crump, who is representing the family along with co-counsel Michele Rayner, called Drejka a “wannabe cop” and urged Gualtieri to arrest him or give up his badge. He also said McGlockton’s death would and should resonate politically: “I believe people are going to have Markeis McGlockton on their minds when they vote in November.”

Advocates sought to narrow the focus on Scott, who they said could declare a state of emergency under his under his authority as Governor and suspend the controversial law. Gillum has said that would be one of his first acts if he is elected.

But since the shooting, Scott’s office has said it is up the Legislature to decide to make changes to Florida law. Democratic state lawmakers have called to convene a special session to deal with the law, though their efforts are unlikely to gain traction in the majority-Republican Legislature.

After the rally, Jacobs and a handful of community leaders marched to Scott’s office in the Capitol to ask for a meeting, though Scott is currently in Colombia.

Denied a meeting, Jacobs left about an hour later to return to Clearwater.

But Gillum, Holmes and two other protestors staged a brief sit-in — singing “We Shall Overcome” and streaming their protest on the Gillum campaign’s Facebook Live — before eventually meeting with deputy chief of staff Jack Heekin.

Scott’s office confirmed the meeting occurred but did not confirm if Scott had called Jacobs.

After the meeting, Holmes said the men requested that Scott consider suspending the law and that the governor call Jacobs, who he said had not yet been contacted by the governor.

“It was a meeting in the right direction,” he added. “This is the time for him to show strong leadership and be the governor for everyone.”

Photo: Britany Jacobs, the girlfriend of Markeis McGlockton, participates in a rally calling for action on the "stand your ground" law in Tallahassee Wednesday. After McGlockton was shot and killed last month, Pinellas County Sheriff Bob Gualtieri deemed the shooting a justified use of force under the controversial self-defense law. (Miami Herald)