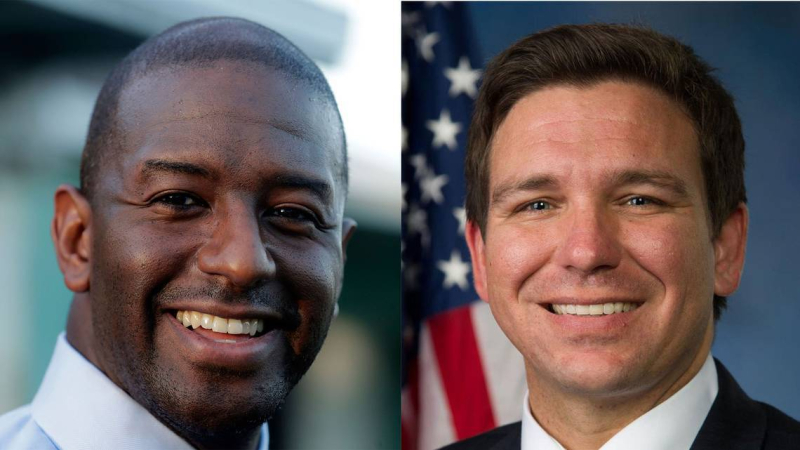 When Democrats made Andrew Gillum the first black candidate ever to win a major party nomination to seek the office of Florida governor, they all but guaranteed that race would be a factor in the coming campaign.

But who knew it would become a national storyline in less than 24 hours?

Before the final vote could be certified from Tuesday’s primary elections, Republican gubernatorial nominee Ron DeSantis thrust issues of race to the fore Wednesday morning when he said on Fox News that voters would “monkey this up” if they embraced Gillum’s “far-left” platform. The comment, coming in a state where confederate monuments still litter the landscape, was widely slammed — and opened up a rift that isn’t likely to close until after November.

“He is an articulate spokesman for those far-left views. And he’s a charismatic candidate,” DeSantis said of Gillum. “I watched those Democratic debates. None of that is my cup of tea but he performed better than the other people there so we’ve got to work hard to make sure that we continue Florida going in a good direction. Let’s build off the success we’ve had with Gov. [Rick] Scott. The last thing we need to do is to monkey this up by trying to embrace a socialist agenda with huge tax increases and bankrupting the state.”

Descriptions of black people as “articulate” have long been interpreted as a condescending reference to education in the black community, and the NAACP characterized the candidate’s “monkey this up” phrase as part of a history of “racist references to African Americans in our national folklore” as monkeys and apes.

“Its only equal in racial semantics [is] the “n-word,” the organization said, while calling on the Palm Coast congressman to apologize.

But DeSantis’ communications director, Stephen Lawson, says there was nothing racial about DeSantis’ interview. The comments were strictly about Gillum’s politics, he said, in contrast to DeSantis’ own conservative views on taxes and spending.

“Ron DeSantis was obviously talking about Florida not making the wrong decision to embrace the socialist policies that Andrew Gillum espouses. To characterize it as anything else is absurd,” Lawson said.

If DeSantis was hoping to highlight his ideological differences with Gillum, he instead seemed to ensure that racial tensions would overshadow them.