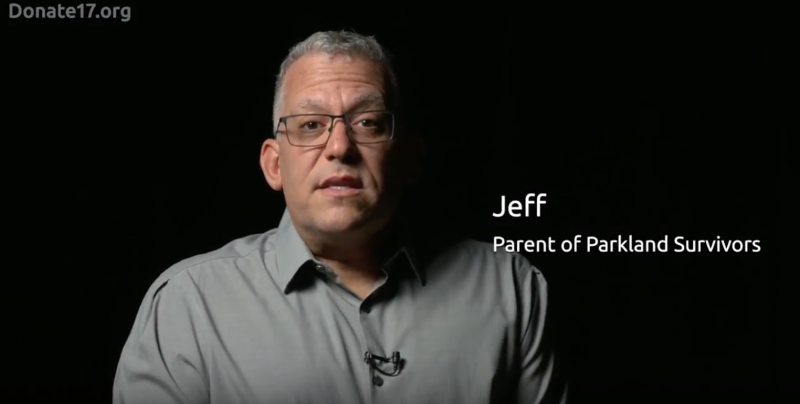 A group of Parkland parents are getting their hands dirty ahead of the 2018 elections.

The Families Versus Assault Rifles PAC, a super PAC organized by Parkland parents who want to oust lawmakers that do not support limiting access to assault weapons, banning bump stocks and limiting magazine size, released a new ad that uses footage from Marjory Stoneman Douglas High School on the day of the shooting and a salvo of gunshots to drum up support for their cause.

The ad, a 30-second digital spot titled "Mass Shootings are NOT Normal" opens with footage of Parkland students being led away from their classrooms during the shooting before the sound of gunshots cuts in. Then, Parkland parents Sergio Rozenblat and Jeff Kasky urge supporters to join and donate to the cause.

"There are certain entities, who are gun lobby entities, who claim certain amounts of membership in the millions of people. There’s one in particular that has 6 million members," Kasky said, referring to the National Rifle Association. "That means there’s 344 million Americans who are not members of your organization. But we also want to be able to say these are the Americans who disagree with your message. You’ve got your 6 million we’ve got our 344 million."

Kasky started the super PAC shortly after the mass shooting on Valentine's Day and his son Cameron became one of the most visible student leaders in the March for Our Lives effort. The elder Kasky's goal is simple: raise money to fund ad campaigns against lawmakers who don't agree with their agenda.

Kasky said the group isn't publicly announcing which races around the country will be a part of their effort until after primaries conclude nationwide in a few weeks, though he said the U.S. Senate race between Republican Gov. Rick Scott and Democratic Sen. Bill Nelson along with the race for the open Florida governor's seat are on his radar personally.

"When we find a candidate who disagrees with us then he or she will be in our crosshairs," Kasky said. "Then, we’ll take a look and see if the investment will be productive."

The group's process is simple, Kasky said. Candidates or lawmakers are asked about their positions on banning bump stocks, limiting magazine sizes and if they support severely restricting assault weapons. If a candidate answers yes to all three, the group moves on. If not, the group will decide if the candidate is worth attacking during election season.

"We’re looking at each race as a possible investment, if we look at a race and it looks like we can make a difference and it's close enough," Kasky said. "We know our opponents are very well-funded and that’s why were in this fundraising mode. Say our guy is 25 points behind in a traditionally conservative gun-friendly area, we’re not going to look at it, its a waste of our money."

So far, the PAC has raised about $200,000 according to federal filings that were due at the end of June. If the group wants to compete with some of the nation's biggest super PACs who can swoop in with TV ads during the final weeks of a campaign it will need to raise millions of dollars.

"It almost goes against every fiber of my being, I’m a professional mediator," Kasky said of the group's negative approach. "I’m a lover not a fighter, but the other side has made it very clear that this is the way they do things. We’re going to have to get a little dirty."