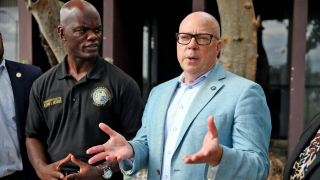 Donna Shalala continues to hold a solid lead in the Democratic primary to replace U.S. Rep. Ilean Ros-Lehtinen, but that massive cushion her campaign had built as the race headed into the summer has all-but disappeared.

For the second time this week, an opponent’s internal poll has found Shalala’s numbers falling and the field rising. A poll released Friday by the David Richardson campaign found Shalala with a 12-point lead over Richardson – less than half the size of the lead her campaign touted in early June. Matt Haggman, Kristen Rosen Gonzalez and Michael Hepburn were all in single digits, with a little more than a quarter of primary voters remaining undecided.

The poll, conducted Monday and Tuesday by pollster Keith Frederick, was based off a query of 300 likely voters by live phone calls, a quarter of them made to cell phones. The margin of error wa 5.6 percent.

“David Richardson has gained nearly half of the undecided who have moved since mid-June; he now holds a clear second place position and is gaining significant ground on Donna Shalala,” Frederick wrote in a memo to Richardson’s campaign.

As with all internal polls, voters should take the results with some skepticism.

But Richardson released his campaign’s findings the same week that Haggman released results from a RABA poll that showed Shalala with a 10-point lead over Haggman and Richardson, who were in a virtual tie. And while the two polls disagreed on where the two campaigns stand, they were unified in findings that Shalala’s numbers were considerably down from the 43 percent her campaign pegged her at in early June.

Richardson’s campaign has Shalala at 32 percent. Haggman’s had her at 26.

Those findings would suggest that a steady stream of critical commercials and ads by both candidates have depressed Shalala’s numbers. The attacks have increased the number of voters who say they have an “unfavorable” view of the former University of Miami president.

Eric Johnson, political strategist for the Richardson campaign, believes Shalala – who is already well-known in the district – may have hit her ceiling with voters.

Johnson said Richardson has an advantage in the Democoratic primary as the state Representative for Little Havana and the only “viable” candidate for a majority-Hispanic district who speaks Spanish (a slight to Rosen Gonzalez). He noted that a quarter of the voters queried in the poll were aware that Richardson had taken a trip to Cuba last month.