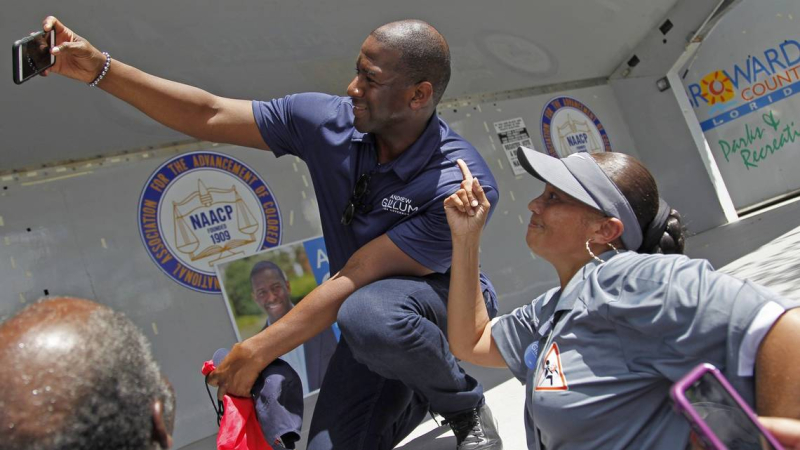 At one of Miami’s best-known black churches, Pastor Arthur Jackson III delivered a message before the Sunday sermon.

“This is a critical election,” he said, speaking from the pulpit as the Antioch Missionary Baptist Church flock fluttered fans bearing the likeness of Tallahassee Mayor Andrew Gillum. “We have to make it happen.”

The people nodded, and repeated his words. And Gillum’s gubernatorial campaign hoped that it was good.

If the only African American candidate in Florida’s Democratic primary for governor is going to make history, he’ll need the help of the state’s black community to get through Tuesday’s primary election. Significantly out-spent by his four opponents, Gillum’s ability to connect with a staunchly Democratic and somewhat disenfranchised voting population remains one of his biggest advantages.

And if his campaign’s talk of a last-minute “surge” from the middle of the pack is to become more than just hype, then Sunday was a likely tipping point for Gillum. The final day of early voting — known as “Souls to the Polls” due to the tradition of faith-based politicking in the black community — had the potential to make or break his upset bid, as black pastors around the state urged their parishioners to cast their ballots.

Gillum, who is running for the Democratic nomination against Gwen Graham, Jeff Greene, Chris King and Philip Levine, has made clear that his campaign is not tailored exclusively to black voters. His message as “the only non-millionaire” in the race is more appropriately described as a call to the lower and middle class.

But while most of the field spent the weekend in north and Central Florida, Gillum, 39, bounced around South Florida’s historically black neighborhoods, traveling from Deerfield Beach to Richmond Heights, where he grew up as a child. He attended Jackson’s church Sunday morning, and was given time to make a direct plea to parishioners.