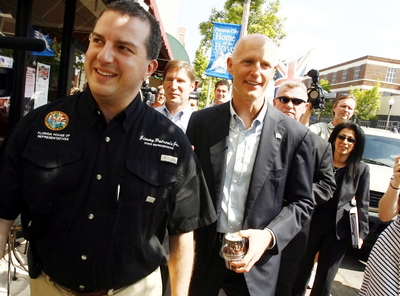 Chief Financial Officer Jimmy Patronis has hit more than $5.1 million in contributions to his campaign for re-election, tripling those of his Democratic opponent, former state senator and Yahoo! executive Jeremy Ring.

Between the $1.9 million donated to his campaign account and nearly $3.3 million from the political committee Treasure Florida, Patronis rises far above others vying for a cabinet position, but not quite topping Attorney General Ashley Moody's $5.7 million.

Patronis was appointed to his current role by Gov. Rick Scott, a longtime friend, after former CFO Jeff Atwater resigned in 2017.

Ring’s campaign account has pulled in just over $580,000, with an added $703,000 from the political committee Florida Action Fund.

The totals are as of the month of August, and don’t reflect spending from third parties or contributions outside of the candidates’ political committees or official campaign accounts.