DeSantis fundraising in Coral Gables next week with Jeb Bush 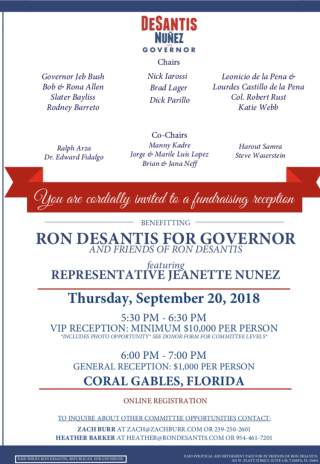 Update: DeSantis' campaign says the invitation obtained Thursday by the Miami Herald was a draft sent only to the chairs of the fundraiser. After vetting, Arza was not included on the list of co-chairs, according to the campaign.

Ron DeSantis, the GOP nominee for Florida governor, will be in Coral Gables next week raising money among Miami’s political class at the Biltmore Hotel.

The fundraiser is chaired ($50K donation) and co-chaired ($25K donation) by former Gov. Jeb Bush, lobbyist Rodney Barreto, University of Miami trustee Manny Kadre, and former state Rep. Ralph Arza, among others. The evening begins with a $10,000-a-head VIP reception at 5:30, and includes a $1,000-a-head general reception at 6 p.m.

"He’s an American pie kind of guy," said Leonicio de la Peña, one of the chairs of the event and the husband of DeSantis' Miami-Dade campaign chairwoman. "He’s a smart guy, motivated for the right ideas and right reasons. He wants to serve. How can you not be excited about someone like that?"

Jeanette Nuñez, a Kendall-area state Representative running as DeSantis' lieutenant governor, will also be at the event, which should raise some badly-needed dollars for DeSantis.

Democratic nominee Andrew Gillum outpaced DeSantis in fundraising during the first days of the general election campaign thanks in part to tens of thousands of small-dollar donations. The Tallahassee mayor reported raising eight times what DeSantis, a now-former congressman, raised over the three days in August following the primary election.

But the Republican Governor's Association has said it plans to spend $10 million backing DeSantis, and Republican boosters have typically had open wallets when it comes to supporting top-of-ticket candidates like DeSantis.

The event is also part of a trend in which DeSantis is spending plenty of time in the county during the general election. Since winning the primary, he's visited the Manuel Artime Theater and Bay of Pigs Museum.