March For Our Lives founder leaves the group, regrets trying to ‘embarrass’ Rubio 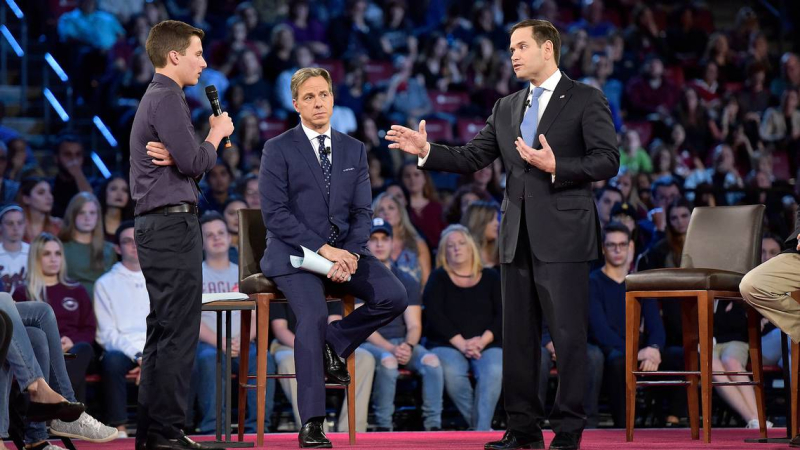 Cameron Kasky became one of the most recognizable faces of the March For Our Lives Movement after he helped raise millions of dollars in a matter of days for a gun-control rally and confronted Sen. Marco Rubio on television after the nation’s deadliest high school shooting .

The Marjory Stoneman Douglas High School senior spent weeks organizing a massive march in Washington that morphed into a nationwide movement and summer bus tour, with an eye toward the upcoming November election.

Now, Kasky is leaving the group.

“I’m proud of everything my friends have done, everything they’re doing, and my focus on opening these conversations to people who disagree with me makes me even more invested in just how important the work they’re doing is,” Kasky said in an email.

Kasky first announced his decision to leave March For Our Lives in an interview with Fox News Radio’s Guy Benson on Wednesday, where he also expressed regret for the way he talked to Rubio during a town hall event broadcast on CNN. At the town hall, Kasky said, “Senator Rubio, it’s hard to look at you and not look down a barrel of an AR-15 and not look at Nikolas Cruz, but the point is you’re here and there some people who are not.” He then grilled the Republican senator over accepting political contributions from the National Rifle Association.

“I look back on that and I say, you know what, there were people who had just been buried and when you’re looking at somebody that you find might in some way have been complicit in this murderer obtaining the weapon it’s hard not to say something like that,” Kasky said to Fox. “But, I went into that wanting less conversation and more to embarrass Rubio and that was my biggest flaw.”

Kasky also said he regrets referring to Cruz by name during the town hall and that he met people during the March For Our Lives bus tour this summer in Texas who share different political beliefs than his, but that he came away wanting to understand more about their differences.

“This summer when March For Our Lives went on the summer tour that we embarked on I met that person in Texas who got that semi-automatic weapon because that’s how they like to protect their family,” Kasky told Fox. “I met the 50-some-odd percent of women who are pro-life, even though I thought it was preposterous that a woman could be pro-life and not pro-choice at the time. I learned that a lot of our issues politically come from a lack of understanding of other perspectives and also the fact that so often young conservatives and young liberals will go into debate, like I said earlier, trying to beat the other one as oppose to come to an agreement... I’m working on some efforts to encourage bipartisanship or at least discussion that is productive and help a lot of people avoid the mistakes that I made.”