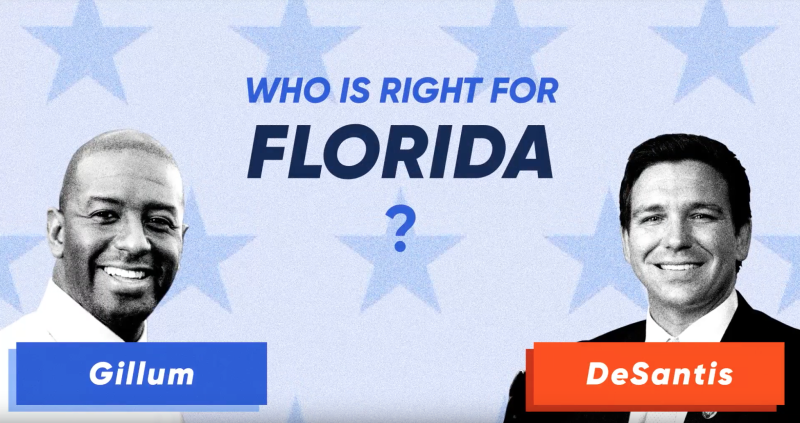 Liberal billionaire Tom Steyer has promised to invest millions into electing Tallahassee mayor Andrew Gillum governor this November — and a substantial fraction of that money will double-down on a strategy his political group says paid off during the primary: digital ads to boost young turnout.

As part of a $1,144,000 digital campaign through the general election, NextGen America is releasing another two digital ads Wednesday urging young voters to head to the polls Nov. 6. The spots focus specifically on the contest between Gillum and Republican rival Ron DeSantis, as well as incumbent Bill Nelson and Gov. Rick Scott for U.S. Senate.

The 30-second ads, which resemble "voter guides" and are scored to the circus tune "Entrance of the Gladiators," compare the respective candidates on issues like health care, guns and education. They are scheduled to run through Oct. 15 and target nearly 1.1 million young voters on Facebook, Twitter and Instagram statewide.

"We're investing heavily in digital ads because we've seen that they're an effective way to connect with young voters, not TV ads," said NextGen Florida spokeswoman Maya Humes. "We saw this with Gillum's win. We'll see it again when 18-35 years old turn out in the midterms. Meeting young people where they are is working."

After Steyer endorsed Gillum in the Democratic primary in June, NextGen dropped multiple six-figure digital ads as part of the billionaire activist's $3.5 million investment in the primary cycle.

After Gillum's upset win last month, Steyer told the New York Times Tuesday that he intends to spend more money in Florida than in any other state and that NextGen will spend more than $5 million with a focus on youth and minority turnout.

Early polls appear narrowly favorable for Democrats, including an NBC/Marist poll Tuesday that showed Nelson and Gillum leading in their respective races (albeit within the margin of error).

The survey, which asked 600 likely voters between Sept. 16 and Sept. 20 about who they would rather vote for, also showed the Democratic candidates winning key voter demographics. Nelson led Scott among Hispanic voters by 20 points while Gillum led DeSantis among those voters by 14 points.