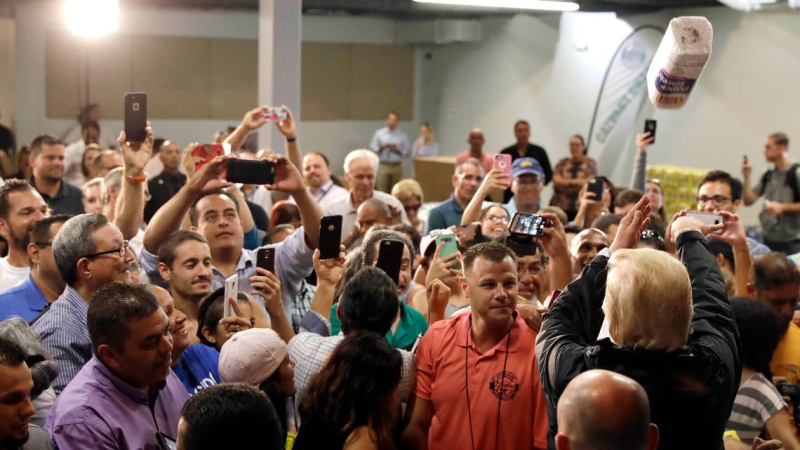 President Donald Trump argued Thursday, without evidence, that the deaths of thousands of Puerto Ricans due to Hurricane Maria was a political stunt by Democrats “to make me look as bad as possible” and that government officials and university researchers “just added” people who died from natural causes to the official list.

The accusation comes a week ahead of the one year anniversary of Hurricane Maria’s landfall in Puerto Rico, which set off a logistical and humanitarian crisis for the U.S. territory’s 3.3 million U.S. citizens.

“3000 people did not die in the two hurricanes that hit Puerto Rico,” Trump tweeted, referring to Hurricanes Maria and Irma, which skirted the island two weeks before Maria hit. “When I left the island, AFTER the storm had hit, they had anywhere from 6 to 18 deaths. As time went by it did not go up by much. Then, a long time later, they started to report really large numbers like 3000...This was done by Democrats in order to make me look as bad as possible when I was successfully raising Billions of Dollars to help rebuild Puerto Rico. If a person died for any reason, like old age, just add them onto the list. Bad politics. I love Puerto Rico!”

The official death toll from last year’s storm stood at 64 until late August, although doubts had been cast on that estimate. Harvard University researchers door-to-door check produced an estimate of over 4,000, though there was a significant variation on the actual death total.

Earlier this week, Puerto Rican governor Ricardo Rosselló, who had avoided criticizing President Trump’s handling of the disaster for months, said that thousands of people died in Puerto Rico and that the relationship between San Juan and Washington is not successful.

“No relationship between a colony and the federal government can ever be called ‘successful’ because Puerto Ricans lack certain inalienable rights enjoyed by our fellow Americans in the states,” Rosselló said in a statement. “The historical relationship between Puerto Rico and Washington is unfair and unAmerican. It is certainly not a successful relationship. This was the worst natural disaster in our modern history. Our basic infrastructure was devastated, thousands of our people lost their lives and many others still struggle.”

“Every morning there is something new that the president tweets,” Cortes said. “I have no reason to doubt the number of 2,975 deaths in Puerto Rico.”