« As Election Day nears, Nikki Fried puts out TV ad calling for 'Something New' | Main | Obama to stump with Gillum and Nelson in Miami between Trump MAGA rallies in Florida » 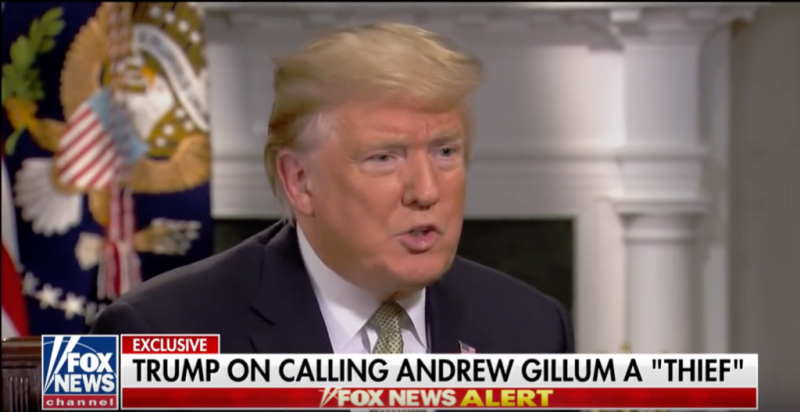 Trump justified calling him a "thief," which he first did on Twitter on Monday, by bringing up the Hamilton ticket that was likely given to Gillum by an undercover FBI agent.

"The FBI offered him tickets at $1800 a piece and he took 'em," Trump said. "He took a trip with the same FBI agent. I guess he was posing as a developer or something. The man stone cold took this stuff. I don't even think he should be allowed to continue on with the race."

Trump also wondered how Gillum could be polling so well, saying that Gillum would turn Florida into Venezuela and that Gillum's Trump-endosrsed opponent, Republican Ron Desantis, is a "very good person."

"He's a disaster, and how he's even close to being tied is hard to believe," Trump said of Gillum.

You can watch the interview here.

With just a week left until the election, and Gillum continuing to hold a narrow lead in the polls, the rhetoric from Trump and his supporters has been heating up.

The Florida governor's race might be the biggest race of the midterms, but there's a special reason why Trump is so interested in the outcome.

DeSantis only made a name for himself by frequently appearing on Fox News to defend Trump, and DeSantis did little to win the Republican primary besides receive Trump's endorsement.

If DeSantis loses, the effect on the 2020 presidential race will be "big time, big time," Former White House political strategist Steve Bannon told the Times before a speech to Republicans in Tampa last week.

"If Rick Scott was not governor, it would have been very hard for us to win Florida" in 2016, Bannon said.

Bannon, a right-wing firebrand, respected how formidable Gillum has been as a candidate, saying that "DeSantis is in the fight of his life."

"I think it’s going to come down to the wire on the last day," Bannon said. "Gillum’s proven that he’s a very tough competitor. … They may have miscalculated at first how tough Gillum was going to be. Gillum at the top of the ticket has made the Senate race more competitive and I think it’s made some of these House races more competitive."