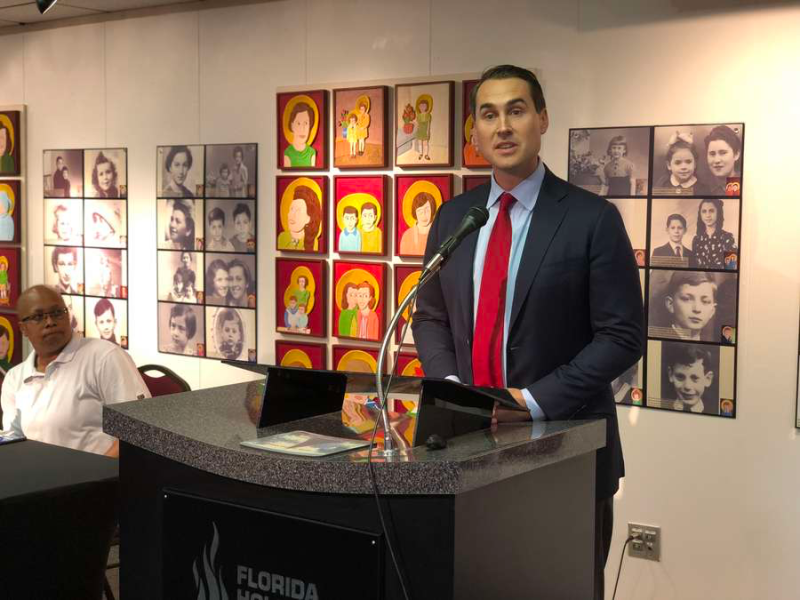 Democratic lieutenant governor candidate Chris King didn't wait a day before responding to the latest ad by the Republican Governors Association, which has blasted his running mate Andrew Gillum's plan to raise the corporate tax rate.

"When I saw the new ad for the RGA yesterday, I think the first word that hit my mind was 'desperate,'" King said on a conference call with reporters this morning.

The Gillum-King plan would increase the corporate tax rate on the state's largest companies from 5.5 percent to 7.75 percent. According to the campaign, the tax would only apply to the largest 2-3 percent of the state's companies.

The plan would generate $1 billion in revenue for the state, and Gillum wants to spend the money raising teachers' salaries and investing in programs like early childhood education.

On Wednesday, the RGA released another ad attacking the plan, comparing it to a car wreck that would bring the state's economy "to a sudden stop."

On Thursday's call, two businessmen said the plan to improve schools was critical to attracting new businesses to the state.

Ken LaRoe, the founder of First GREEN Bank, said his Orlando-based company would make $10 million in net profit next year. Under Gillum's plan, his company would pay an additional $200,000 in corporate taxes, he said.

He called that "a very, very small sacrifice to make" to build a good school system.

LaRoe later apologized for his language, expressing his frustration with the last two decades of Republican leadership in the state. He said his comments were referring to how other people perceive Florida.

"I’ve entered a very profane stage of life," LaRoe said. "I love this state, and in my travels around the country and the world on business, the rest of the country, especially, is looked at disdain at the state of Florida. ... I’m just sickened by what’s happened in this state."

When asked about LaRoe's comments, King said he disagreed with them.