« How Andrew Gillum’s Miami childhood shaped the views of Florida’s would-be governor | Main | ‘We are not the enemies’: GOP candidate touts journalism career in congressional race » 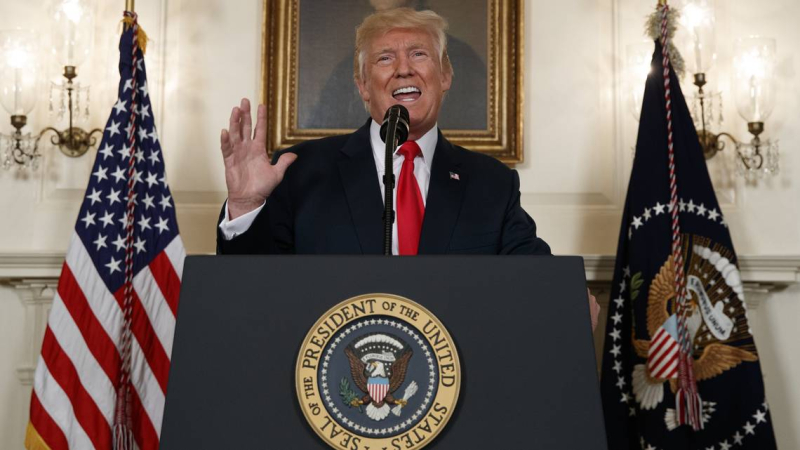 The president banned foreign nationals from seven majority Muslim countries from entering the country weeks after he took office, setting off protests around the country. He announced the end of an Obama-era program to prevent the deportation of immigrants who came to the U.S. as young children, calling on Congress to act. The Trump administration began separating families and children who crossed the border illegally, and some parents were deported while their kids remained in U.S. custody. And Trump canceled a temporary program that allowed immigrants from Haiti, El Salvador, Nicaragua and Honduras to live and work in the U.S. without the threat of deportation.

The three Miami Republicans in Congress, Reps. Ileana Ros-Lehtinen, Carlos Curbelo and Mario Diaz-Balart, were opposed to all of these policy changes. The trio have the largest shares of eligible Latino voters in their districts among all Republicans in Congress and have tried for years to overhaul the nation’s immigration system. They want to prevent their law-abiding constituents from being deported, but they’ve been stymied by their own party.

“That’s been my biggest disappointment,” Diaz-Balart said about the lack of an immigration compromise in the past two years. “In order to get that issue done, you need to put hyper-partisanship aside. You need to have the trust of everybody around the table.”

Republicans in Congress have been unable to overrule the president’s executive order, find a solution for the young immigrants known as Dreamers and help individuals receiving Temporary Protected Status. Instead, they’ve been reliant on liberal judges to prevent deportations. Last week, a federal judge in California ruled against the Trump administration’s decision to end TPS, and Dreamers remain in legal limbo weeks from Election Day.

“Such great news for our South Florida community!” Ros-Lehtinen tweeted last week after the TPS decision. “We have wonderful folks from these countries who have been here legally and their pending deportations would be heartaches for their familias!”

The Democrats seeking to replace the trio largely agree with the South Florida Republicans on immigration policy, though they likely wouldn’t support handing Trump money for his border wall in exchange for protecting existing immigrants from deportation. They’re arguing that a Democratic majority in Congress is the way to get an immigration solution.

There isn’t any evidence that Curbelo and Diaz-Balart, along with Maria Elvira Salazar, the Republican seeking to replace Ros-Lehtinen, could convince the majority of their party to come up with a solution should they all win on Nov. 6. Curbelo and Diaz-Balart were part of a small group of lawmakers who first negotiated with Democrats to find a solution for Dreamers, an effort that fell two votes short. Then, they tried to negotiate with conservatives in their own party, an effort that saw a conservative compromise immigration bill fail badly.

“It’s truly disappointing that after months of broken promises from Speaker [Paul] Ryan for Dreamers, Congressman Curbelo caved so easily to House Republican Leadership and handed over every piece of leverage on DACA to the most anti-immigrant Republicans in Congress,” Curbelo’s Democratic opponent, Debbie Mucarsel-Powell, said shortly after Curbelo’s compromise effort failed this summer.