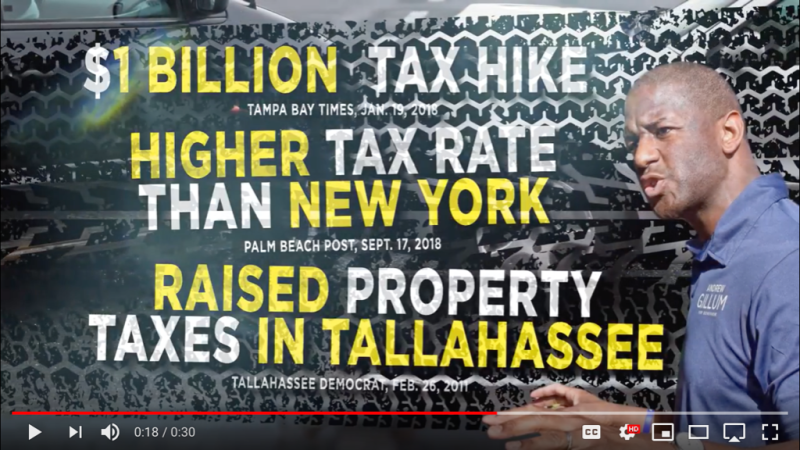 The Republican Governor's Association is again hitting Andrew Gillum on his proposed $1 billion corporate tax hike for to pay for education.

The Republican Governor's Association is out with another TV ad hitting Democrat Andrew Gillum on his proposed $1 billion corporate tax hike to pay for education, comparing it to a car wreck that would bring the state's economy "to a sudden stop."

"Florida’s economy is running at full speed," the ad says. "37% growth since 2010. But Andrew Gillum’s ideas would bring it to a sudden stop."

Politifact in September rated the claim that Gillum would raise taxes by $1 billion "mostly true," but noted it lacked context. That same context is also left out of this ad.

Gillum, who is running for governor, has said he wants to spend the money on raising the starting teacher salary to $50,000, increasing the pay for veteran teachers to the national average, and on early childhood education programs.

Here's what else Politifact said about the RGA's September ad:

The RGA's ad is running statewide on broadcast and cable as part of a $10 million ad effort. This ad is the third ad in the campaign, according to an RGA spokesman.

A Wall Street Journal story last year found that the RGA (and its Democratic counterpart, the Democratic Governors Association) are mostly funded by corporations, who use the two associations as loopholes to get around state campaign finance laws.