« Republicans see tax cuts as a way to motivate voters when Democrats have enthusiasm | Main | As Michael closes in, state has its own storm-related issues » 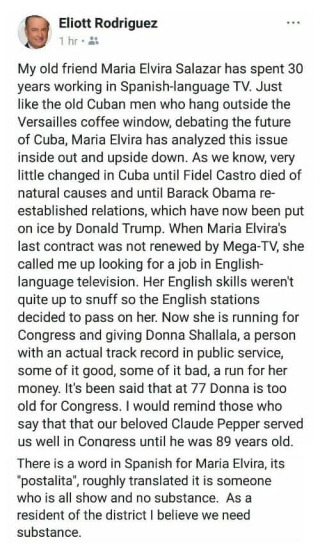 A CBS Miami news anchor has apologized after referring to a congressional candidate and former journalist as a "postalita" and suggesting that she left the industry to run for Congress at least in part because her English wasn't "up to snuff."

Anchor Eliott Rodriguez took to Facebook Sunday to say that Salazar, a veteran of Spanish-language journalism in Miami, didn't voluntarily retire as a reporter in January to campaign for Congress but rather ran for Rep. Ileana Ros-Lehtinen's open seat after Mega TV, her former employer, decided against renewing her contract. He said she spoke to him about looking for a new job in the field after leaving the station, but was turned down at English-language stations because her language-skills were lacking.

Rodriguez also critically compared Salazar, 56, to her Democratic opponent, former University of Miami president and Human Health and Services secretary Donna Shalala, 77. Rodriguez has interviewed both on air about their campaigns.

"There is a word in Spanish for Maria Elvira, it's 'postalita,' roughly translated it is someone who is all show and no substance," Rodriguez wrote. "And as a resident of the district I believe we need substance."

Rodriguez appears to have taken down the musing and apologized for "a rambling, disjointed and rather incoherent Facebook post" after critics began blasting him on social media, suggesting that he'd inferred that Salazar's accent made her unqualified for Congress. Miami Rep. Carlos Curbelo, a Salazar supporter, called the comments "shocking" from a "decent man and a serious journalist." And Salazar's campaign consultant, Jose Luis Castillo, called Rodriguez's comments "offensive," and "a slap in the face to our diverse South Florida community."

"As an experienced journalist, he knows he has a responsibility to report news objectively and avoid expressing personal views. We believe Eliott has learned from this experience and will uphold his and our journalistic standards going forward. He has interviewed Ms. Salazar, along with her opponent before, and has been fair to both candidates."

Rodriguez, who said during an interview that ran early last month that he's known Salazar for roughly 30 years, has invited Salazar to come onto the station's 7 p.m. broadcast to discuss his comments. But Castillo, Salazar's campaign consultant, said she's very busy and an appearance is unlikely.

"I don't see that happening any time soon," he said.